Is your microbiome a raw foodist?

“What impact does cooking have on the microbiome?” I can’t quite recall who asked the question. We were in our weekly joint lab meeting between our lab and Rachel Dutton’s (who is now at UCSD working on the cheese rind microbiome) during my time as a Bauer Fellow at the Harvard Center for Systems Biology. What I’ll never forget is my flippant response that cooking probably doesn’t matter at all given the variation in macronutrient intake and all the other environmental factors (especially drugs) that shape our gut microbial communities and their metabolic activities. Now, nearly 7 years later, I'm eating my words!

Shortly after that lab meeting, I got an e-mail from Rachel Carmody, a phenomenal graduate student working with Dr. Richard Wrangham in the Harvard Department of Human Evolutionary Biology. Richard is famous for his book “Catching Fire”, not the one about the kids who fight each other (which I also cherish), but the one about the pivotal role fire (and cooking in general) played in human evolution. Rachel had conducted a series of controlled experiments in mice demonstrating that the same diet fed raw or cooked had a dramatic impact on mouse body weight, with raw diets leading to rapid weight loss. The phenotype was striking and began her ongoing quest to determine its mechanistic basis.

Fortunately for me, Rachel had convinced herself that one of the consequences of consuming raw food would be to reshape the gut microbiome, which might explain some of the observed weight loss. There were multiple reasons why cooking might matter to gut microbes, including increasing the “digestibility” of starch, changes to the chemical composition of the diet, among others. But no one had directly tested what happens when you feed a raw versus cooked diet to animal models or humans.

One reason for this is that most of our studies in lab mice use highly processed cooked diets, a fact that is incredibly convenient for controlled experimentation but quite different from what wild animals consume. Despite this issue (and the inevitable criticisms from Rachel’s postdoctoral fellowship reviewers) we forged ahead, analyzing samples from mice fed raw or cooked meat and tubers. At the time, I was very interested in products of the Maillard reaction that form during cooking and make grilled steak both delicious and potentially deadly. However, we were surprised to find that there wasn’t a clear distinction in the gut microbiomes of mice fed raw and cooked meat.

In contrast, the microbiomes mice fed raw and cooked tubers were fundamentally different in terms of their structure, transcriptional activity, and metabolic end-products. Now the question was why? Our first hypothesis was related to the increased ability of host enzymes to breakdown cooked versus raw starch. If more starch was going to the host on the cooked diet this could deprive the gut microbiome of its favorite substrate. Experiments using controlled diets confirmed the importance of starch digestibility. This line of inquiry also led to one of my favorite reviewer comments of all time, “why not [test] carrots?” The reviewer’s rationale made sense, since consumption of raw tubers is rare in America (although not impossible, see photo below). More importantly, this led us to design a mad scientist experiment – we carefully fed mice raw and cooked sweet potato, white potato, corn, peas, carrots, and beets then collected their poop to look for microscopic organisms. These results strengthened our conclusions from controlled diets, highlighting the importance of cooking for starch-rich foods.

At this point we thought we were more or less ready to publish our findings, but a fateful experiment opened up an entirely unexpected area for future studies. Corinne Maurice (at that time a postdoc in our lab who is now at McGill) had developed methods for quantifying microbial cell damage and activity from gut samples. Teaming up with Rachel and a talented summer intern (Kylynda Bauer), they used this assay on mice fed raw and cooked tubers. The results were striking, mice fed raw tubers had comparable levels of microbial cell damage to the oral antibiotic ampicillin. This was totally unexpected to us based on starch digestibility, since the raw tuber diet delivers more substrates to the distal gut and suggested that raw tubers may contain antimicrobial compounds.

But what are the compounds that matter most? Rachel did a deep dive into the literature, revealing two promising candidates: chlorogenic and caffeic acid. She then proceeded to gather a remarkable amount of negative data, neither of those compounds had a consistent impact on the gut microbiome. At this point, we went back to the drawing board, reasoning that we needed to take a more unbiased approach. Multiple members of our lab (which had moved to UCSF) worked closely with Trent Northen’s group (Joint Genome Institutes) to perform metabolomics on the foods used for our comparative veggie experiment. The results highlighted the truly complex chemical changes in each plant in response to cooking and allowed us to identify a short-list of compounds that could explain the changes we had observed in mouse models. If you’re a biochemist reading this, drop me a line – there’s a lot more work to be done.

Another surprise came from our transplantation of the raw and cooked gut microbiome into germ-free recipients. Mice fed the raw diet rapidly lose weight, which we thought might have been driven by the observed perturbation to the gut microbiome. Instead, we found that the microbiome of mice fed the raw tuber diet increased overall body weight and body fat, which was associated with increased caloric intake.

Finally, we sought to determine the relevance of these findings for humans. For years we had attempted to link-up with people consuming raw food to conduct observational studies, but these efforts hadn’t progressed fast enough. We also tried to mine available data from American Gut and other large-scale microbiome studies, but we didn’t quite have the right information to make the necessary comparisons. So, Rachel, after joining her old department at Harvard as an Assistant Professor, took the initiative to design and conduct a human intervention study. Her secret ingredient was Vayu Main Rekdal, a graduate student with our close collaborator Emily Balskus (Harvard), a professional chef and food enthusiast. Vayu designed a delicious and well-controlled pair of raw and cooked menus, which were fed in random order for 3 days each to our participants. Working with Jordan Bisanz (a postdoc in our lab), Rachel discovered that this short-term intervention markedly altered the human microbiome and that the changes were distinct between the raw and cooked diets.

Looking back, it’s remarkable to me how much has changed over the course of this study. The year we started this work my first daughter was born and now she’s in 2nd grade. Our lab moved from Harvard to UCSF and I’m now a tenured professor. Rachel moved to San Francisco then back to Boston, launched her own independent research program, and had a child of her own. Perhaps more importantly, I no longer doubt the importance of cooking and other methods of food preparation for shaping host-microbiome interactions. There’s still a lot to be unpacked at a mechanistic level and in terms of the downstream consequences of these microbiome perturbations for host physiology, but I’m optimistic that in the coming years these answers will become clearer.

Now back to watching Catching Fire.

Thank you for doing research on this PIVOTAL topic! I’m myself a RawFoodist (fruit based)  I will always be! I’m convinced that this is the healthiest lifestyle for humans. Happy to collaborate with you if you ever need. Neuropathologist! (I’m a UCSF graduate but currently working and living in England). 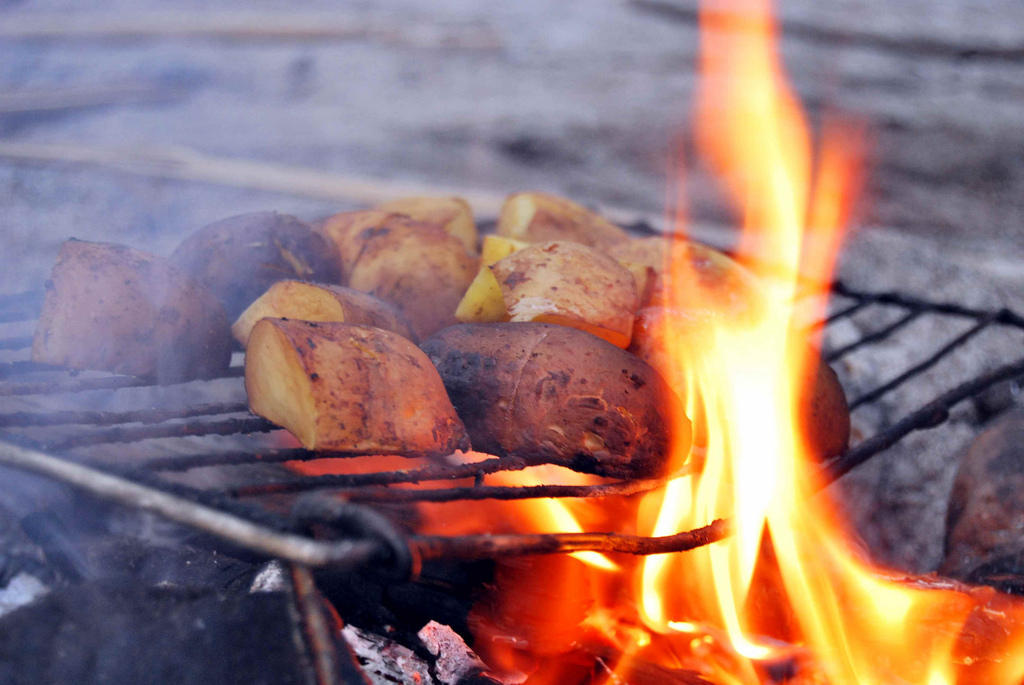 Is your microbiome a raw foodist?