A community from Nature Microbiology
Contributor Nature Comms
Behind the paper, News and Opinion

Researchers turn bacterial viruses into lasers that can bind specifically to proteins and give off a signal 10000 brighter than comparable diagnostic methods.
Ben Libberton
Science Communicator, Freelance
Follow
Like Liked by Cesar Sanchez
0

Many ligand-binding assays still rely on signals that scale linearly with probe concentration. The authors present lasing detection probes with a dye-labelled virus as the gain medium to optically amplify the signal, which could enable much higher signals than for fluorescent quantification.

Lasers today don’t look like they used to. The lasers have infiltrated our modern world are solid state, meaning that they use a crystal as the base for producing laser light. However, solid state lasers aren’t the only kind, in fact much early work was done on an entirely different type of laser and unlike solid state, this technology can turn biological material into lasers themselves.

In the 1960s in the labs of IBM, a scientist named Peter Sorokin developed this entirely new kind of laser. They already had a ruby laser which was solid state but they wanted to be able to tune it. Sorokin produced a near infrared, liquid dye and excited it with his ruby laser. When he did this, the energy from the ruby laser stimulated the dyes to produce a narrow stream of intense infrared light, in other words, a liquid laser. The discovery and subsequent research on the dye laser helped to revolutionise the field of laser physics, even aiding in the advancement of solid state lasers which ultimately became more widely used.

Now, a team of scientists from University College London Department of Biochemical Engineering, the Swiss Federal Institutes of Technology in Zürich and Lausanne, and The Paul Scherrer Institute have gone back to dye lasers and combined them with synthetic biology to produce the very first virus laser. The laser isn’t attached to the virus, it’s not mounted or stuck on, “the virus is the laser,” explained John Hales, one of the leads on the study. The virus laser, is actually made from the bacteriophage M13 with the coat protein decorated with the dye fluorescein. When this bacteriophage is then excited with a specific intensity of photons, it acts as an amplifier, putting out thousands of times more photons than it would otherwise emit in a specific direction and frequency.

The project started in a meeting between physicists and biologists at the London Centre for Nanotechnology when Gabriel Aeppli, who is also a lead author of the study said “why don’t we make a laser?” The idea is not as crazy as it sounds, physicists have already produced lasers from biological material such as proteins and DNA using the theory from the Sorokin dye lasers. Nobody had ever tried it with a bacteriophage before though and synthetic biology tools that were available for modifying phage made the prospect very appealing.

All they needed was a student. John Hales had just binned the catalogue of PhD topics having not found anything that could meet his demanding standards for a project that would truly cross the disciplines of physics and biology. As a physicist, he had just completed lab rotations including structural, computational and chemical biology so he needed something special, and virus lasers were it.

But it wasn’t plain sailing. When John started the PhD, he didn’t even have the equipment he needed to measure the laser light, he had to build it. “A large part of the project at the beginning was building the laser photometer that we needed to develop the virus laser,” he explained. This is the Masterchef equivalent of having to construct a hob from scratch before you even crack an egg. But build it he did it in collaboration with Guy Matmon, another coauthor, and before long, the lab was up and running, he just had to tame the bacteriophage.

There were more challenges when it came to converting the phage into lasers. The main problem was that the literature from the dye laser field had to be adapted to a brand new system. This meant that while all of the ideas from the decades of previous work could give clues on how to move forward, there were very few direct methods that could be taken and reused. Getting the lasers to work required a lot of perseverance.

Despite the challenges the results were staggering. Depending on the tuning of the energy going into the laser it was possible to get 10,000 times amplification of the signal. “It was more sensitive than we thought it would be which was very exciting and adds to the list of potential applications,” described Hales.

So the world now has virus lasers, but what are we supposed to do with them? The concept is so unique, it’s tempting to dismiss it as a gimmick. That would be a mistake. Using synthetic biology, the virus  [A5] can be used like an antibody to bind very specifically to different molecules yet the virus body is a laser giving off an intense light signal. It’s like if current antibody sensors were small LEDs and the virus was, well, a laser. The intense brightness means the sensitivity is much greater, not only making current assays better but also allowing for new assays that could never have been produced before. “The idea is to combine the concepts of the dye laser with the concepts of synthetic biology. We can use the programmability of synthetic biology to make lasers which are exquisitely sensitive to particular proteins,” explained Gabriel Aeppli.

Every now and again, technologies come around that are completely revolutionary. Think of transistors and CRISPR. When they started to be implemented, the worlds of research and medicine change rapidly and the past was quickly unrecognisable. Virus lasers have the potential to do the same. “There is a demand for fresh approaches to analytics in many fields and incremental steps aren’t going to deliver. One fresh approach is virus lasers. We have new reagents, instruments and modes of detection,” explained Hales.

Lasers amplify light and the ability to amplify a signal has led to important advances in technology in the past. Think of the polymerase chain reaction (PCR) which allows us to amplify DNA and carry out genetic research. Then there’s the transistor which amplifies current in your electronic devices. “A transistor is a few billion amplifications on a chip, a PCR is an amplification. Now we’re putting optical amplification at the disposal of the biomedical community,” explained Gabriel Aeppli.

However, lasers will only amplify the light signal above a specific energy threshold which is very different from fluorescent antibodies in a typical diagnostic kit. As antibodies accumulate the signal gets gradually stronger. However, with a virus laser, the signal will only be produced above a certain threshold, depending on the input energy. This makes the laser like a binary On/Off switch so the signal is much cleaner which is perfect for diagnostics. The threshold can also be tuned very specifically by changing either the laser virus concentration or the input energy, which makes the whole system very flexible.

One of the main applications of this research is to be able to produce diagnostics that are much more sensitive than they were before, leading to earlier and more accurate diagnosis of diseases. Another exciting application is in biological manufacturing. The virus lasers are very simple to use and require no extra steps, meaning that they could be used “at-line” during the manufacturing process to give real time analytics.

Given the promise of this technology, Gabriel Aeppli and John Hales are heading towards commercialisation and are likely to start a company. They were recently awarded €100,000 from the European Union ATTRACT fund which will allow them to do more commercially focused research to get a company up and running. John Hales was also awarded a Royal Society Edinburgh Enterprise Fellowship aimed at commercial translation of the project.

More and more, we are talking about how different forms of virus are having a positive impact on our health. Bacteriophages can be used to treat antibiotic resistant infections and recombinant viruses can be used to deliver targeted drugs to cancer cells. Thanks to virus lasers, in the not too distant future, viruses could also be helping us to diagnose disease and improve the production of medicines. 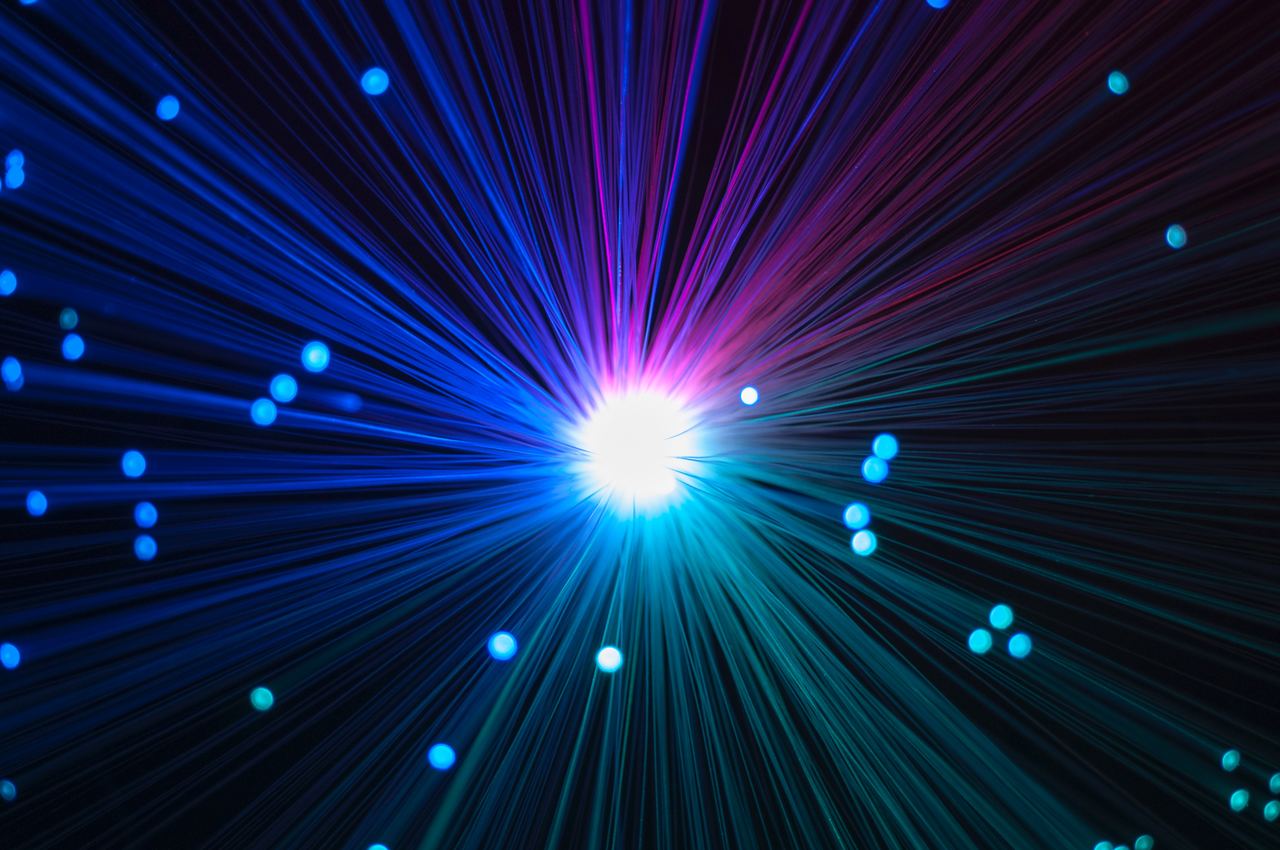 Researchers turn bacterial viruses into lasers that can bind specifically to proteins and give off a signal 10000 brighter than comparable diagnostic methods.