A tale of two archaeal families

The discovery of marine planktonic archaea in the early ’90s by Fuhrman and DeLong resulted in a paradigm shift in our understanding of both archaeal ecology and marine microbiology. These discoveries proposed that archaeal communities, denominated uncultured marine group I (MGI) and II (MGII), as new members of the microbial plankton. At that time, it seemed hard to reconcile the extremophile character of known archaea with the innocuous conditions of coastal marine environments. Nonetheless, subsequent research aided by visualization and culture-independent techniques confirmed the global distribution of marine archaea.

Unlike MGI, MGII remains elusive to culture and its relation to marine geochemical cycles relies solely on culture-independent techniques. Among these efforts, researchers observed increased abundances for MGII populations following algae blooms comprising of up to ~30% of the total microbial community. Additionally, the discovery of seasonal dynamics of two groups within the MGII communities proposed distinct niches for the winter (MGIIb) and summer (MGIIa) groups. These findings, initially limited to a phylogenetic gene marker (i.e., 16S rRNA genes), were recently expanded by massive sequencing efforts, unveiling the genetic characteristics of these elusive MGII communities. These efforts confirmed a photoheterotrophic lifestyle in addition to the characterization of metabolic traits that helped understand their success in surface ocean waters. Additionally, during the past ISME meeting in Leipzig, we attended a session that proposed a family tie between MGIIa and MGIIb groups and named them Candidatus Poseidonaceae and Candidatus Thalassarchaeaceae, respectively.

In our research group, we are interested in studying the role of recurrent phytoplankton blooms in the North Sea and its impact on the marine carbon cycle. Over the past years, we have found that members of the Flavobacteria, Alphaproteobacteria, and Gammaproteobacteria dominate the remineralization of the released organic matter that follows massive algae blooms. Our recent time-series metagenomic approach allowed us to recover thousands of metagenome-assembled genomes representing many of the main phytoplankton microbial communities. We quickly confirmed the presence and high abundance of MGII populations that followed the algae blooms. It was to our surprise that at the moment of finishing our characterization of these MGII communities of the North Sea, two publications also delved into the taxonomical and functional description of these communities obtained from marine metagenomes. Relieved that similar observations were shared among our manuscripts, we were enthusiastic to release our findings mostly focused on the possible ecological role of the two MGII families in the organic matter recycling during winter and also associated with massive algae blooms during spring/summer.

In our report, we combined visualization (i.e., CARD-FISH) and metagenomic approaches to explore temporal patterns and propose a distinct niche for both MGIIa and MGIIb populations of the North Sea. By visualizing these archaeal populations, we realized that their relatively small coccoid size likely results in grazing avoidance. Additionally, at the genomic level, we observed highly identical and annually recurrent discrete populations for both families during the winter and summer periods. Nonetheless, both families encode a considerable set of metabolic strategies that allow them to thrive under the differential nutrient and substrate availability during winter and summer.

Oded Béjà
over 3 years ago

can you please link the original paper?

Luis H. Orellana
over 3 years ago 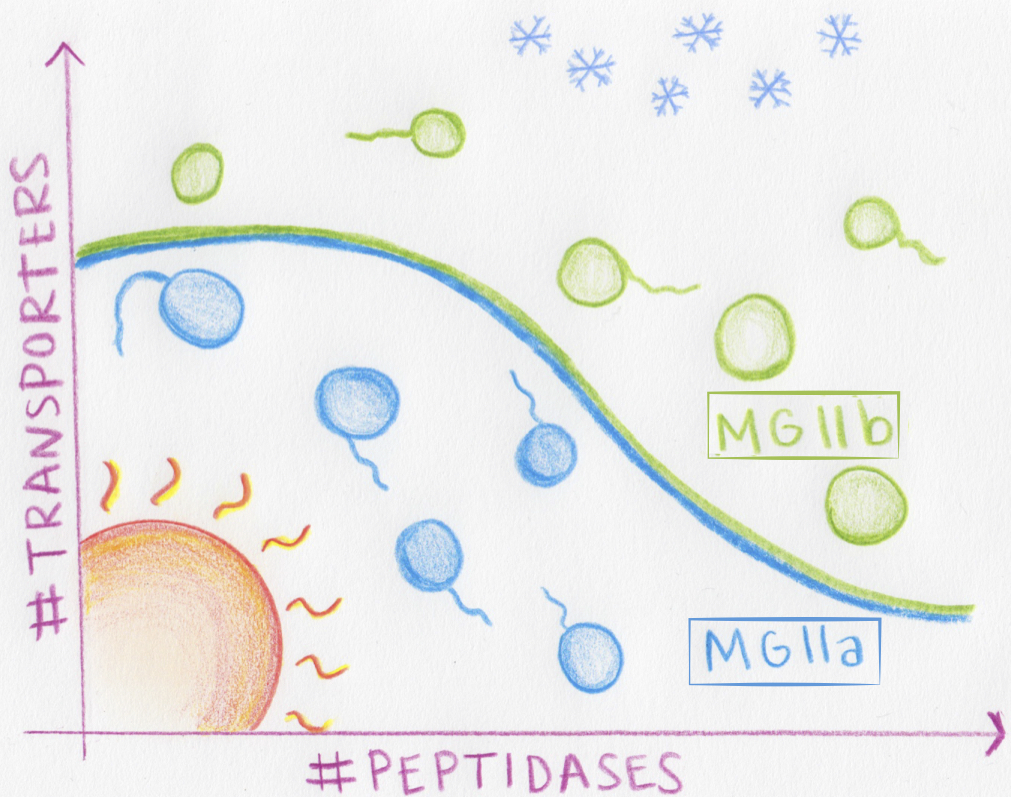 A tale of two archaeal families