We are sorry, but we are experiencing unusual traffic at this time. Please help us confirm that you are not a robot and we will take you to your content.

Malaria control and elimination efforts have resulted in remarkable success over the past two decades. Globally, there has been a significant reduction in morbidity and mortality attributed to malaria since 2000 [1], largely attributable to insecticide treated bed-nets and highly efficacious treatments [2]. Effective treatment of malaria relies on Artemisinin Combination Therapies (ACTs), the current first-line antimalarial for the deadliest human infecting species, Plasmodium falciparum. Alarmingly, for the last decade artemisinin resistant strains of P. falciparum have emerged and spread throughout mainland South East Asia.

Artemisinin resistance is characterised clinically by an increase in the time taken for patients to clear parasitemia in therapeutic efficacy studies [3]. Antimalarial immunity, which develops in response to repeated exposure to Plasmodium spp., is known to contribute to the efficacy of antimalarial treatments through additional parasite clearance, particularly antimalarial IgG responses [4]. Immunity may therefore give the impression of efficacious treatment during infection with drug resistant parasite strains and/or sub-standard dosing [5]. The functional antibody mechanisms associated with parasite clearance during treatment, however, are yet to be quantified. Detailed understanding of the effects of antibody functions that contribute to parasite clearance facilitates accurate estimation of within host parasite dynamics and the continued monitoring of the therapeutic efficacy of artemisinin treatments. We therefore sought to identify the mechanism of antibody mediated contribution to parasite clearance time and measures used to phenotypically monitor artemisinin resistance [6].

Utilising samples collected from nearly one thousand participants of a multinational clinical efficacy study of artemisinin across eleven South East Asian study sites, we probed the function of antimalarial IgG antibody responses to determine to what extent they impact phenotypic measures used in the surveillance of emerging artemisinin resistance. IgG subclasses (IgG1 and IgG3) were measured in response to parasite antigens known to induce antibody responses associated with protection from clinical symptoms. Results demonstrated that IgG3, but not IgG1 antibodies, were associated with faster parasite clearance; the main metric currently used to assess the efficacy of artemisinin treatment and the emergence of reduced susceptibility to the drug. Additionally, antibody-mediated opsonic phagocytosis of parasites, and fixation of early complement proteins on parasite surface antigens were measured and found to have the largest magnitude of effect on reducing parasite clearance time. Furthermore, functional IgG responses were lowest in regions of Western Cambodia and Eastern Thailand where the highest proportion of participants infected with an artemisinin resistant parasite strain were surveyed. These findings provide novel insight into the current understanding of the role of functional antibody mechanisms in the phenotype of artemisinin resistance, and to parasite clearance and antimalarial treatment efficacy more broadly.

Presently, there are no replacements for the artemisinins, and current reliance on ACTs is great with hundreds of millions of courses procured annually. The spread of artemisinin resistant P. falciparum strains to regions of intense malaria transmission could have devastating consequences. The most up to date data demonstrates that the spread and consolidation of drug resistance in the GMS is worsening, and rising ACT treatment failure is compounded by parasite strains resistant to partner drugs [7]. It is therefore vital that surveillance of artemisinin resistant P. falciparum incorporates detailed understanding of the contribution of host factors, including naturally acquired immunity. These findings further our current understanding of the role of acquired immunity during antimalarial treatment and its contribution to phenotypic surveillance of emerging antimalarial drug resistance. 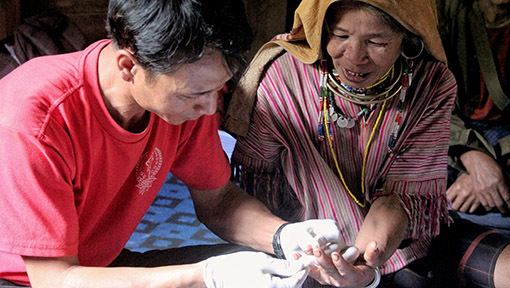