Perfect navigation: How to fit a compass needle into a helical bacterium?

In our paper "MamY is a membrane-bound protein that aligns magnetosomes and the motility axis of helical magnetotactic bacteria" we explore how spirilla manage to fix a compass needle-like magnetoreceptor in a corkscrew-shaped cell and thereby nicely optimize magnetotaxis.
Frank D. Müller
Head of laboratory, University of Bayreuth
Follow
Like Be the first to like this
0

Magnetotactic bacteria must assemble magnetosomes into a linear chain that orients the cell along magnetic fields, yet how spiral bacteria with highly curved surfaces accomplish this is unclear. Here, MamY is shown to assemble into linear structures that serve as a scaffold for magnetosomes in magne…

Honeybees, migratory birds, sharks, turtles and many more animals take advantage of the Earth’s magnetic field as omnipresent signpost to find distant targets. However, despite many and sophisticated attempts to understand animal magnetotaxis, the molecular base for this enigmatic sense remains elusive. By comparison, magnetotactic bacteria represent a presumably more simple, single-celled system in which magnetotaxis is much more definite. For example, it has long been known that cells of the bacterium Magnetospirillum gryphiswaldense are magnetotactic by their up to 50 intracellular magnetosomes, magnetite nanocrystals surrounded by a membrane, which are attached to a cell-spanning filament made of the actin-like MamK protein. This attachment causes the magnetite crystals not to clump together as a result of their own magnetic pull, but to become lined up, thus assuming the function of a compass needle. This enables the bacteria to follow the orientation of the Earth's magnetic field during their swimming movements and thus reach their preferred habitat, the sediments of natural waters, more quickly.

The discovery of the aktin-like filament (and the associated protein MamJ) several years ago seemed to answer all major questions about construction of a “compass needle” and performing magnetotaxis in bacteria. However, especially in magnetotactic spirilla, some intriguing issues remained: It was a mystery why this intrinsically flexible chain of magnetosomes took such a stable, linear form – while the bacterial cell body comes close to a corkscrew, i.e., there was no straight cellular structure obvious which could support the linear track of the magnetic organelles. Moreover, short fragmented magnetosome chains had been observed in mutant strains that lack the actin-like MamK and hence any discernible stabilizing element. These puzzling observations led to the hypothesis that there has to be another supporting protein that would help magnetotactic bacteria create their straight compass needle. Yet, such protein could not be identified by many years.

The answer came by screening a set of newly made deletion mutants devoid of putative genes for magnetosome biosynthesis. Among them was a strain with deleted mamY, a gene so far implicated in other functions such as magnetosome vesicle formation in a related magnetotactic bacterium. Looking at the TEM images, we thus got disappointed, as the cells seemed to contain regular chains of magnetosomes. Nevertheless, the chains appeared somehow unfamiliar: They were bent and localized to the "wrong" side of the cell body. To understand that we may have hit here a missing chain-localizing factor took us some time as this required to mentally convert the two-dimensional TEM micrographs from Magnetospirillum cells back into three-dimensional helices with an internal magnetosome chain. This insight was the starting point for an in-depth analysis of MamY, which finally turned out to be a key-player of an appealing and unexpected concept of how helical magnetotactic bacteria embed a straight “compass needle” in their spiral shaped cell body.

Altogether, we now can define a sophisticated “magnetoskeleton” which to date consists of three cytoskeletal factors dedicated for magnetotaxis. The actin-like MamK and its adaptor MamJ represent the dynamic part of the magnetoskeleton as they actively concatenate magnetosomes and position the chain at midcell, thereby also ensuring precise splitting and equipartitioning of the magnetoreceptor upon cell division. The static MamY structure by contrast is responsible to identify and to tether the dynamic assembly to the geodetic cell axis, i.e. to fix it along the shortest path connecting the cell poles. This straightens the “compass needle” within the helix and aligns it with the motility axis, thereby perfectly superimposing the Earth's magnetic field vector on swimming movements. These results highlight that the phenomenon of bacterial magnetotaxis still bears unexpected and sophisticated features waiting for discovery.

Check out the video: 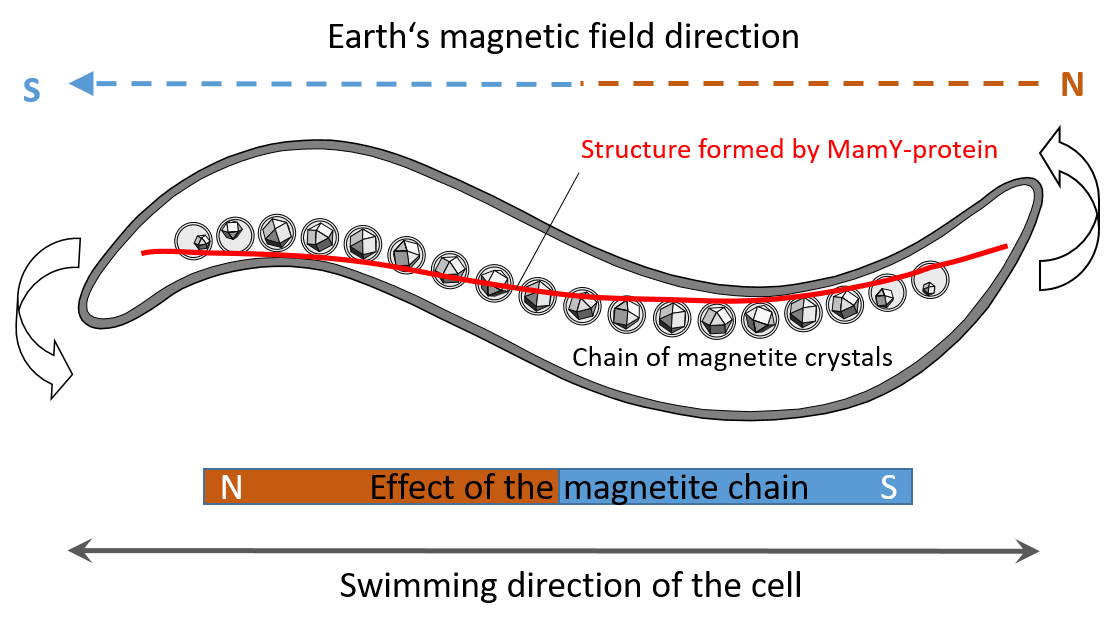 Perfect navigation: How to fit a compass needle into a helical bacterium?

In our paper "MamY is a membrane-bound protein that aligns magnetosomes and the motility axis of helical magnetotactic bacteria" we explore how spirilla manage to fix a compass needle-like magnetoreceptor in a corkscrew-shaped cell and thereby nicely optimize magnetotaxis.