Modelling the impact of interventions for HBV: Focus for World Hepatitis Day

We describe how a collaboration between clinicians, academic virology and mathematical modellers delivers key messages that can inform strategies for the elimination of hepatitis B virus infection.
Philippa Matthews
Associate Professor, University of Oxford
Follow
Like Liked by Raihan Shah Mahmud and 2 others
0

HBV vaccination and PMTCT as elimination tools in the presence of HIV: insights from a clinical cohort and dynamic model - BMC Medicine

Background Sustainable Development Goals set a challenge for the elimination of hepatitis B virus (HBV) infection as a public health concern by the year 2030. Deployment of a robust prophylactic vaccine and enhanced interventions for prevention of mother to child transmission (PMTCT) are cornerstone…

United Nations Sustainable Development Goals (SDGs) have set an international target for the elimination of viral hepatitis infections as a public health threat by the year 2030 (1), in the context of an estimated global prevalence of >250 million hepatitis B virus (HBV) cases, accounting for close to a million deaths each year (2). World Hepatitis Day, marked annually on 28th July, sets out to champion international efforts to combat viral hepatitis infections, with an urgent unmet need to inspire attention, advocacy and action to overcome a backdrop of chronic neglect (3).

The compelling and concerning nature of this problem is exemplified in southern Africa, where HBV has been eclipsed by the high profile emergency of pandemic HIV, side-lined by poverty, overlooked as it is typically asymptomatic until the end stages of disease, and discounted as a substantial threat on account of an active vaccination campaign that has been rolled out since the mid 1990’s. However, as HIV infrastructure, therapy and interventions for prevention have become more stable and established, there is now emerging bandwidth and an opening window of opportunity to re-assess the challenges of HBV infection. Such scrutiny is unveiling a large burden of chronic liver disease including an alarming and escalating burden of liver cancer (4), often affecting young adults in what should be active, productive, and healthy years of life.

Building on a long-standing partnership between clinical and research teams in the UK and South Africa, we worked with the paediatric department at Kimberley Hospital in the Northern Cape to gather data and samples from antenatal women and children attending hospital services to investigate the prevalence of HBV infection and exposure (5, 6). Reflecting many other settings across the African sub-continent (7), chronic HBV infection remains endemic in adults (affecting >10% of adult women in our cohorts). However, the roll out of the HBV vaccine as part of the World Health Organisation Expanded Programme on Immunisation, has had a substantial positive impact in reducing prevalence in children to <1% (6).

Having generated this snapshot of the current local epidemiology, we were interested to consider whether we could use our data to predict how patterns of infection will change over time. Based on existing and ongoing deployment of vaccination, is it safe to assume that we are on a comfortable and predictable trajectory towards the 2030 elimination targets? We used our own Kimberley data, supplemented by careful review of the existing literature, to model the dynamics of HBV infection at a population level, accounting for the pools of individuals who are susceptible, vaccinated, infected, or have been exposed and cleared, and deriving the parameters that determine flow between these groups. We applied this model to estimate the impact of interventions over time, by influencing the proportion of the population in each pool, changing the dynamics of flow and considering the effect of co-endemic HIV infection (8).

Strikingly, we found that even with 100% vaccination coverage in infancy, the time-frames suggested for elimination targets to be reached stretch to decades, and if less than 100% coverage is attained, then decades become centuries. Enhancing specific interventions for prevention of mother to child transmission (PMTCT) also reduces the incidence of new infections, but with longer overall time-frames to impact than rigorous vaccination of all infants (8).

The two key insights we have gained from this body of work can appear to conflict; we conclude firstly that the paediatric vaccine campaign should be celebrated as an enormous success, with a striking impact on reducing HBV infections among immunised children, but secondly that simply continuing this intervention over the coming decade will not come close to delivering elimination. However, presenting the two messages together in a unified publication was an essential aspiration, as both results have important potential to influence ongoing clinical and public health practice. We must continue to vaccinate in infancy, extending the reach and coverage of vaccination campaigns to prevent infections in individual children and to reduce population prevalence. However, we must also avoid complacency, and should actively challenge assumptions that vaccination alone can tackle an endemic chronic infection that frequently persists for the lifetime of the host, circulating in a huge, undiagnosed population reservoir.

Our model can help to inform steps for future progress, for example by highlighting populations in which high rates of vertical transmission might warrant enhanced investment in PMTCT, and by suggesting specific target groups for intervention, such as the population of infected individuals who express the HBV e-antigen protein, reflecting high viral loads and therefore enhanced transmission potential. We have an unprecedented opportunity to make strides towards international hepatitis targets over the decade ahead, but this hinges crucially on the development and refinement of high resolution epidemiological data, alongside multilateral efforts in education, political and clinical advocacy, diagnostic testing, roll out of access to monitoring and treatment and sustained investment in optimising population-specific interventions for prevention. World Hepatitis Day should be used as an opportunity to headline this urgent public health priority, calling for increased political investment and leadership on the international stage, in order to drive progress towards the 2030 targets. 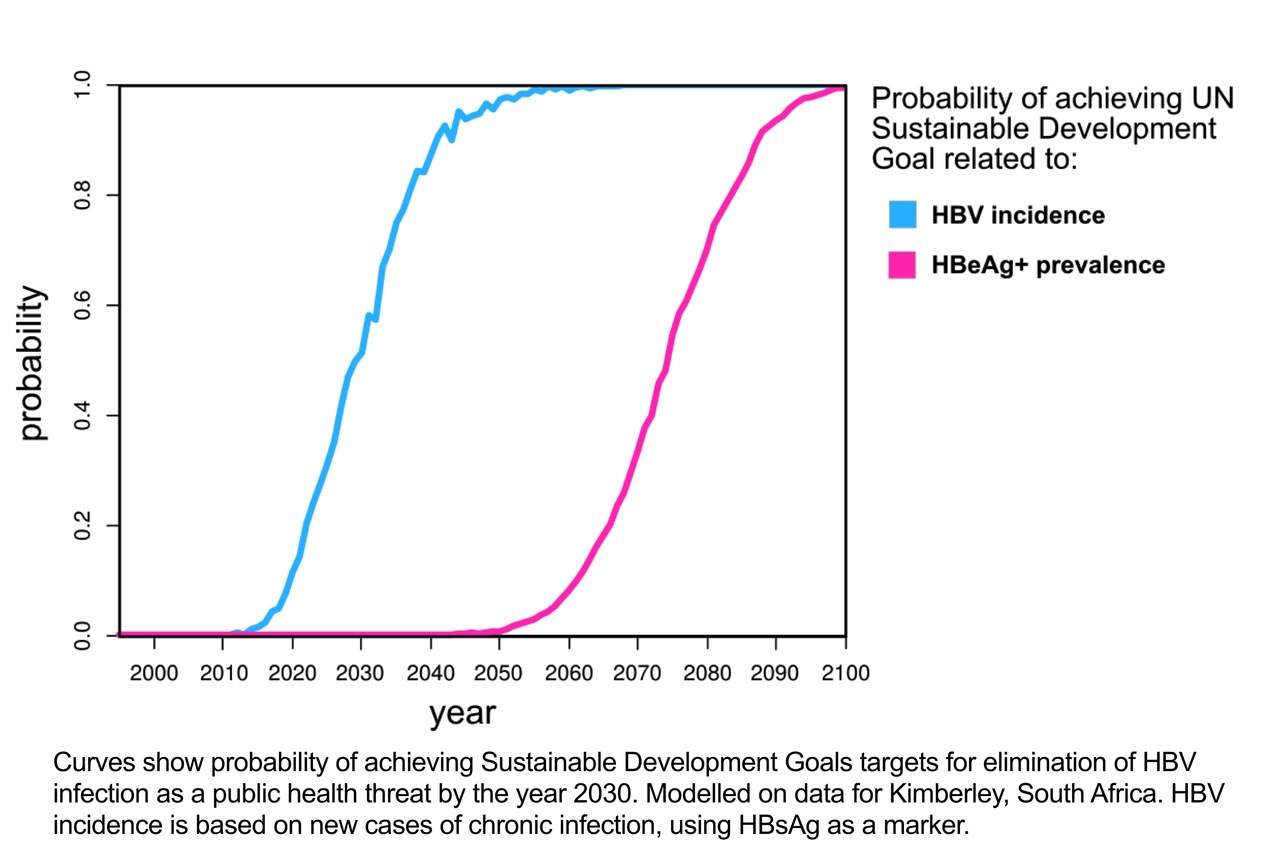 Modelling the impact of interventions for HBV: Focus for World Hepatitis Day

We describe how a collaboration between clinicians, academic virology and mathematical modellers delivers key messages that can inform strategies for the elimination of hepatitis B virus infection.