Eavesdropping on plankton with robots: lessons from the microbes of the California Current

Despite their minuscule size, microbial plankton have an enormous role to play in ocean health. Microbial primary producers keep the marine life fed, heterotrophs recycle carbon and key nutrients, and viruses decide who lives to shape the oceans another day. Interactions between community members make a big difference in how well they (and the creatures that depend on them) live and thrive. But growing microbial plankton in a lab is notoriously difficult. This problem inspired a wild idea: what if instead of bringing the plankton to the lab, we could use robots to bring the lab to the plankton?

In September of 2010, a newly developed seagoing robotic sampler called the Environmental Sample Processor (ESP), took a 3 day ride on the meandering currents off the California coast.  Its mission was to conduct a diel survey of microbial gene expression, by filtering and preserving the microbial cells (and their nucleic acids) in seawater every 4 hours.

The Environmental Sample Processor (left) on deck next to the buoy that will keep it afloat (right). Photo courtesy of MBARI.

Importantly, the robot was free-drifting, allowing it to sample the same microbial populations and take “snapshots” of their gene expression patterns over time. The study was the culmination of a collaboration between Chris Scholin of the Monterey Bay Aquarium Research Institute (MBARI), whose lab designed the ESP, and Ed DeLong (then at MIT). DeLong’s lab extracted RNA from the robotically collected samples and sequenced the time-series samples using newly developed RNA-Seq methods to learn what microbial genes were “turned on” when and which ones might have day/night patterns. The study, spearheaded by Liz Ottesen in DeLong’s group, provided new insight into the daily rhythms of small microbial plankton.

Left: Diagram of the free-drifting Environmental Sample Processor, a "robotic molecular-biology laboratory" developed by the Monterey Bay Aquarium Research Institute. © 2014 MBARI. Right: Actual image of the massive flotation buoy from which the ESP was suspended with humans for scale. Photo courtesy of MBARI.

But the Ottesen study only looked at the small microbial size fraction less than 5 um – mostly bacteria. So, what about the “big guys” like larger phytoplankton? DeLong decided to contact large-phytoplankton expert Andrew E. Allen, to see if he was interested in taking a peek at the “big stuff” (>5 um) that was collected in the same study by the ESP in 2010. Andy said yes, DeLong’s group extracted the RNA and prepared cDNA from the large phytoplankton size fraction >5 um, and shipped it off to Allen’s lab for further study. The Allen Lab prepared Illumina Truseq libraries and used the HiSeq2000 platform to generate 100bp paired end reads. Additionally, 16S and 18S rRNA amplicons were generated from total RNA and sequenced using 454 pyrosequencing technology.

That’s when it became my job to make sense of the “time-lapse movie” of gene expression in the large size class. The prokaryotes that got stuck on the large filter were different than the ones in the small size class. They were likely living on particles, and indeed, expressed genes related to organic matter degradation and competence (environmental DNA uptake)! The eukaryotes were mostly novel species, which was both exciting, and bioinformatically challenging. Chlorophyll and nutrient measurements alongside molecular markers also indicated that the growth of the phytoplankton was being limited by iron.

Previous studies of small size class (< 5um) drifts had found bacterial genes that peaked in expression at the same time each day, and even found a daily “cascade” of transcriptional activity across taxa. In the large size class, we were also able to detect “diel oscillating” genes in all taxa groups except fungi and archaea. Some algae expressed as many as a quarter of their genes on a diel cycle (e.g. Ostreococcus spp.), but others had only a few oscillating genes (e.g. dinoflagellates, which are known to regulate most of their physiology post-transcriptionally). Most diel genes peaked in the early day (these were dominated by energy-garnering functions) and the early night (many of these were involved in cell division—possibly as a way of shielding DNA from UV stress). In particular, genes involved in photosynthesis turned on synchronously and in the same order each morning, despite belonging to very diverse organisms.

In some cases, like in the case of high-turnover photosynthesis proteins, the timing of diel transcription has a clear purpose. But many protein pools take several days to turn over, and transcriptional peaks don’t always translate into immediate shifts in the protein pool. One explanation for diel-timed transcription in this case is translational coincidence, a mechanism by which precisely-timed gene expression can interact with day/night differences in translation rates to allow seasonally-adaptive genes to be over-expressed during longer days. We identified low iron-responsive genes that, according to this mechanism, would be over-expressed during the summer, when iron limitation and photoperiod combine to create the harshest iron stress in this region.

Finally, we were surprised to find viruses present that infect many of the major taxa (both phytoplankton and bacteria) observed in the drift track. Many of the viruses had total transcriptional activity that was in sync with their hosts. This may be because large dsDNA viruses are energy-intensive to replicate and rely heavily on host metabolism.

So far, we’ve only followed plankton with robots a handful of times, but future drifts have the potential to teach us about how the lives of microbes change in diverse natural contexts. That will be important for understanding not just all of the microbes we can’t culture, but also what the biology of our oceans will look like in a physically and chemically changing world.

The sun may have set on this ESP deployment, but hopefully there will be many more to come. Credit: Phil Sammet © 2010 MBARI. 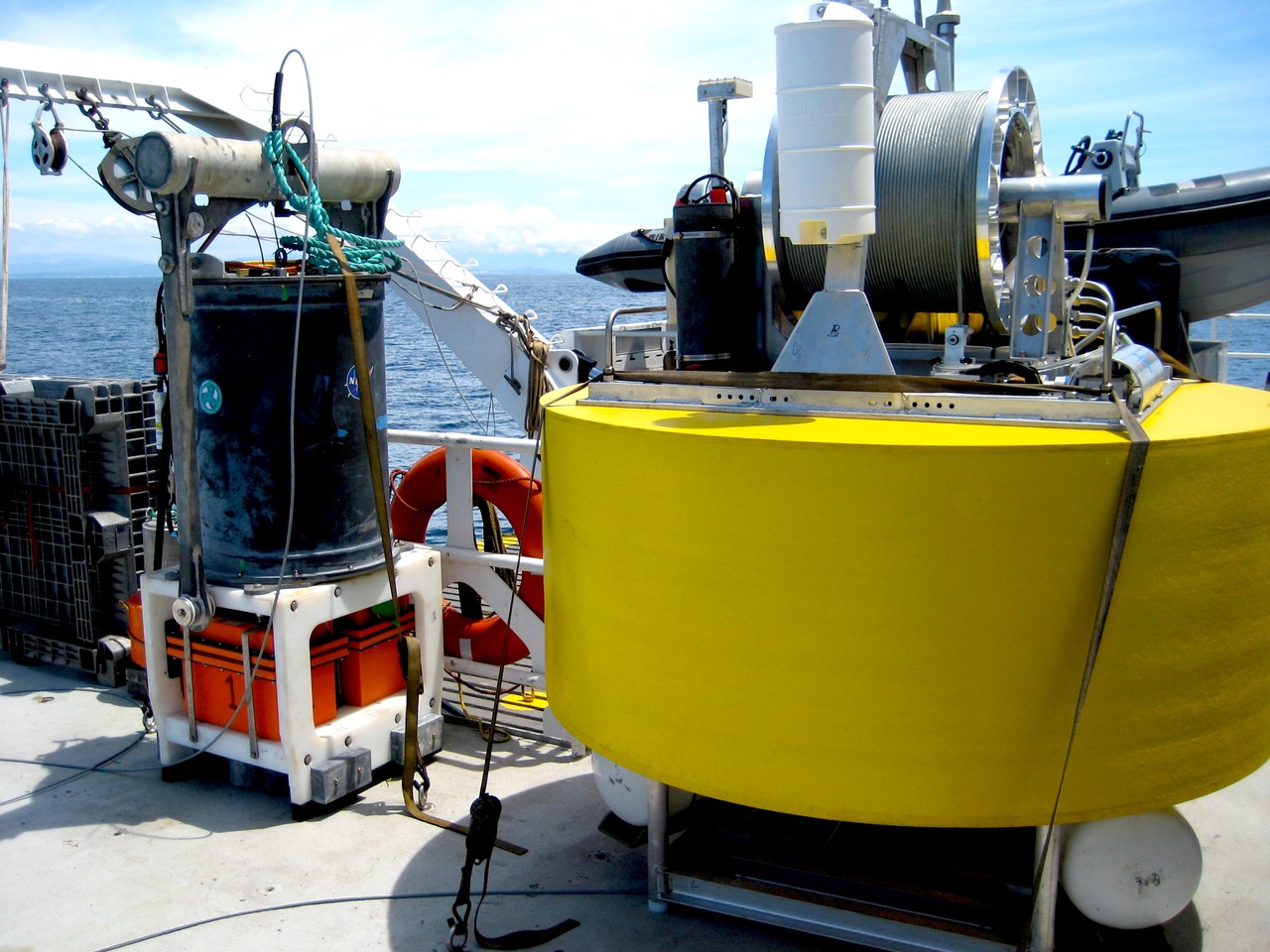 Eavesdropping on plankton with robots: lessons from the microbes of the California Current