If you were to go to your local duck pond today, you would likely see a number of different species. Although a bucolic scene, what you may not realise though (because the ducks look perfectly healthy) is that those ducks are reservoirs for a whole community of different viruses, known as a ‘virome’. If you sampled all those ducks today, do you think they would all have the same viruses? Or support the same virus communities? If not, what would dictate the differences?

Studying viruses in wild birds is crucial as approximately 70% of the avian biomass can be attributed to one species – the domestic chicken, which acts as an important amplifier for microbes, including emerging, remerging and zoonotic viruses. The traditional way to study virus ecology is using a “one host – one virus” system. But this is not realistic; influenza A virus, for example, infects many different animals including 100 species of wild birds. However, in wild birds, a remarkable number of studies have assessed only one virus, avian influenza A virus, in only one species - mallards - alone. Rather, understanding the contribution of the host community to maintenance of a large number of viruses is critical. In this article we investigated how viruses evolve and are maintained in complex multi-host communities. Our study set out to do just that, and involved the sampling of 5 duck species and 4 shorebird species and analysed and interrogated the entire virome present. To do this we used a relatively new and powerful approach - bulk RNA sequencing (meta-transcriptomics, or RNA-Seq).

Our study showed that “a duck is not a duck is not a duck”. That is, we found considerable virome heterogeneity - the ducks in our example duck pond did not all share the same viruses and virus communities. But, we also found "connectivity", in that the viromes of three duck species shared some of the same viral species – an influenza A virus, a gammacoronavirus and a novel rotavirus. The viromes of ducks and shorebirds were somewhat different, but we did find some viruses in shorebirds that have previously been described in ducks. What was also striking that closely related species did not necessarily have closely related viromes. For example, we sampled two ducks of the genus Anas which you might expect to have similar viromes, but rather, it was ducks that were very distantly related that shared viruses! Therefore, host phylogeny wasn’t a big driver of virome composition.

This is one of the first virome ecology studies venturing beyond simply describing new viruses, but instead attempts to unravel the ecology of viral species and communities in wildlife. We did, however, find over 20 new viral species along the way, demonstrating the potentially huge number of novel viruses that exist amongst wildlife.  In addition to the novel virus species, we also found the usual suspects – influenza A viruses, avian paramyxovirus type 1 (now called avian avulavirus), and coronaviruses.

Birds are everywhere and have a very close relationship with humans. Wild birds can be found in our cities (including our example duck pond), foraging in waste water treatment plants, landfills and water reservoirs. Our work shows that wild birds are a critical reservoir for viruses, and we cannot understand virus emergence in poultry without understanding the viromes of their wild avian cousins. . 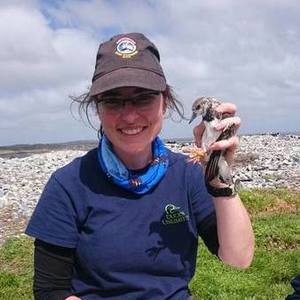 Post doc, Doherty Institite, WHO Collaborating Centre for Reference and Research on Influenza