In our recent paper, “Anaerobic oxidation of ethane by archaea from a marine hydrocarbon seep”, we describe the first known anaerobic microorganism able to oxidize ethane in the absence of oxygen. Candidatus Argoarchaeum ethanivorans belongs to a previously uncultivated clade of archaea, grows as free cells, forms ethyl-coenzyme M and oxidizes ethane completely to carbon dioxide. Argoarchaeum-related archaea have been found at marine hydrocarbon seeps around the world, indicating a widespread environmental role as natural gas degraders.
Florin Musat
Scientist, Helmholtz Centre for Environmental Research - UFZ
Follow
Like Liked by Oded Béjà and 1 other
1

An archaeon, ‘Candidatus Argoarchaeum ethanivorans’, which is involved in the oxidation of ethane observed in anoxic marine habitats, is identified and metabolically characterized.

Sulfate-reducing cultures growing on hydrocarbons are not famous for being fast. Still, the ethane-degrading Candidatus Argoarchaeum ethanivorans sets a new standard for sluggishness. Late in 2002, while doing my PhD work at the Max Planck Institute for Marine Microbiology in Bremen, I received from Samantha ‘Mandy’ Joye a sediment sample collected in the Gulf of Mexico. Together with Mandy and Friedrich Widdel, my PhD coordinator, we embarked on starting so called enrichment cultures with a broad range of hydrocarbons, including components of natural gas and crude oil. Ethane was one of them. At that time, the research field dealing with anaerobic microorganisms able to grow on hydrocarbons was about a decade old – the first strict anaerobe growing on hexadecane (a hydrocarbon from crude oil) was identified in 19911. Consortia of Archaea and Bacteria able to degrade methane without oxygen were just being discovered2. Still, microorganisms able to oxidize other hydrocarbons of crude oil and natural gas, including ethane, propane and butane, were unknown. These alkanes are abundant in gas generated by thermal decomposition of organic matter in deep sediment strata, and are discharged in large amounts through natural seeps at the sea floor. We imagined that being a constant presence in sediments around such seeps, indigenous microorganisms should have adapted to use these hydrocarbons as growth substrates. We were motivated by the exploratory nature of the work: what kind of microorganisms would feed on such compounds, what biochemistry would they use to gain energy and biomass from hydrocarbons, what could be their impact on the environment?

Setting up anaerobic enrichment cultures is rather straightforward: we would add mud and anoxic sea water in cultivation tubes, seal them with stoppers and replace the air with an oxygen-free gas mixture. We would then add a single hydrocarbon as substrate, and only those microorganisms able to use it would grow – hence, become enriched. We aimed to enrich microorganisms able to use sulfate for anaerobic respiration, since sulfate is very abundant in seawater. For the enrichments with ethane we started with two cultivation tubes, each receiving two milliliters of sediment and 10 milliliters of culture media. Weekly sulfide measurements became monthly measurements, then roughly every second month, to avoid wasting too much of the culture volume just for monitoring. One year of incubation passed without any hint of ethane-dependent reduction of sulfate to sulfide. For all this time, sulfide concentrations were very similar to those in a control experiment without ethane. And then it happened: a spike in sulfide formation after about 15 months, continuing to increase into the 18th month of incubation. Over one year and a half, and we were finally ready for the first transfer into fresh culture medium. To make matters worse, only one of the two original tubes worked: the other one showed no sulfide formation, and we had to discard it. Our hopes, that we passed the most time-demanding step, the initial enrichment of ethane degraders, and that subsequent cultures will be faster, soon faded: over the following years, the ethane-degrading culture settled into a growth rhythm of about 6 months. It took about 5 years of consecutive transfers to obtain sediment-free cultures, and a similar time to grow enough culture for experiments.

The first investigations we’ve done were aimed at identifying the ethane degrader and the biochemical mechanism of ethane activation - the initial reaction that adds a handle to the ethane molecule to channel it into the metabolism. Those initial results were puzzling. Because the first identified anaerobes able to oxidize propane and butane were sulfate-reducing bacteria which activated those alkanes by addition to fumarate3, we expected a similar scenario for the ethane-degrading culture. Hybridizations with specific probes and fluorescence microscopy indeed showed that sulfate reducers are present in this culture. Their abundance was however rather low, not what we expected from a main ethane degrader. Instead, under the fluorescence microscope the filters were most of the time covered with very abundant bright ‘dots’, which showed DAPI but no probe signals (at that time we used mostly probes targeting Bacteria). These were much smaller than what we observed in other cultures, and our first thought was that they must be a sort of contamination occurring during sample preparation. Those samples went to waste, and we started all over again this time broadening our methodology to consider also Archaea. It took a complementary approach of amplicon and metagenome sequencing and analysis, irreproachably conducted by Song-Can Chen, and brilliant CARD-FISH images done by Niculina Musat, to resolve the community structure, and the identity of those puzzling dots: they were Archaea, and by far the most abundant cells in the culture.

These findings put us on the right track for metabolite analyses. Our early analyses were aimed at identifying ethylsuccinate – of which we found no trace, despite using significant volumes of culture for extractions. The abundance of Archaea and our recent finding that the longer-chain alkanes propane and butane can be activated by methyl-coenzyme M reductase-like enzymes4, led us to suspect a similar reaction for ethane. The very slow growth, low amount of biomass and suspected low concentration of the hypothetical ethyl-coenzyme M metabolite confined the choice of analytics: we decided to go for direct infusion, Fourier-transform ion cyclotron resonance mass spectrometry (in short, FT-ICR MS). This technology works with minute volumes of samples which do not require pretreatment (we directly injected the crude cell extracts) and provides an ultra-high mass accuracy. The analyses were conducted by Oliver Lechtenfeld. Oliver’s thoroughness and expertise in FT-ICR MS were essential also for our earlier detection of propyl- and butyl-coenzyme M4. This time, our series of misfortunes seemed to have reached an end: we detected ethyl-coenzyme M in the first sample we analyzed, and continued to detect it in all following replicate extracts we analyzed5. The picture started to get a frame: ethane was degraded by Archaea, the first reaction was the formation of ethyl-coenzyme M, and the sulfate-reducing bacteria were there most likely as electron sinks.

Filling in the rest of the picture felt now as a cruising job: we identified the alkyl-coenzyme M reductase that activates ethane, we used protein structure modelling to understand what makes it for its substrate specificity, and we reconstructed the complete ethane oxidation pathway based on metagenomics and metaproteomics data. Two big questions still remain: how is ethyl-coenzyme M connected to the rest of the pathway, and how do the archaea interact with the sulfate-reducing bacteria in a culture where all cells grow mostly unattached? For the first question, biochemistry has no precedent, and we are bound for surprises. For the second, models have been proposed, and more experimental evidence is needed. The answers to these are up for future studies. Our remaining task was to find the right name for the ethane-hungry archaea. We all agreed that ethanivorans should be the species name. We thought the genus name should reflect the peculiarities of the strain, but still keep a wider character to accommodate future species. We came up with few Latin-based names that would refer to its origin in deep-sea sediments, or to its dietary preferences. But in the end it was a Greek-rooted name that was taking hold: these archaea will be defined by their striking slow growth, as Candidatus Argoarchaeum ethanivorans5.

The original publication can be found here.

Ronald Oremland
about 3 years ago

Theoretically, the Acyl-CoM reductase should be capable of forming ethane, propane, and butane running in the "forward" direction, akin to methanogenesis vs. "reverse" ANME. Small amounts of ethane have been shown to be linked to methanogenic metabolism of ethylated precursors analogous to methane thiol and dimethylsulfide. Finding a true ethanogen, i.e., an archaea that can form ethane (or higher) starting with CO2 reduction would be quite something. 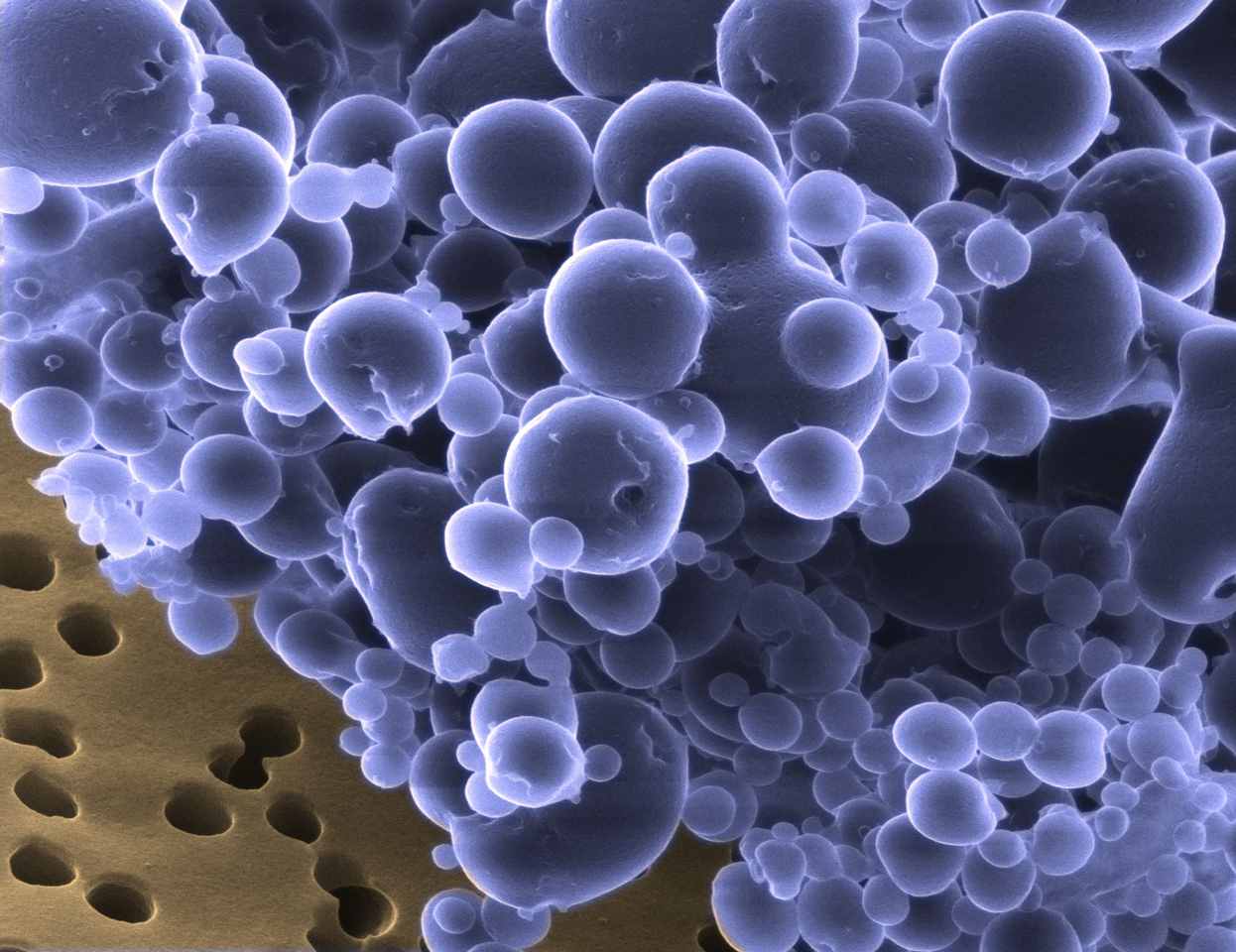 In our recent paper, “Anaerobic oxidation of ethane by archaea from a marine hydrocarbon seep”, we describe the first known anaerobic microorganism able to oxidize ethane in the absence of oxygen. Candidatus Argoarchaeum ethanivorans belongs to a previously uncultivated clade of archaea, grows as free cells, forms ethyl-coenzyme M and oxidizes ethane completely to carbon dioxide. Argoarchaeum-related archaea have been found at marine hydrocarbon seeps around the world, indicating a widespread environmental role as natural gas degraders.