The spread of dengue in a changing world

Statistical mapping techniques provide insights into the current geographical spread of the mosquito-borne dengue virus infection and predict changes in the areas that will be environmentally suitable to the virus for the years 2020, 2050 and 2080.

Dengue is a mosquito-borne viral disease that has undergone a sustained overwhelming spread over the past 80 years. Although its primary mosquito vector species, Ae. aegypti, prefers to live in hot tropical cities, it has proven to be extremely adaptable. By stowing away on various forms of transportation, this invasive mosquito has spread throughout the tropical world and is showing signs that it can increasingly survive in temperate areas and at high altitude and is starting to invade pockets of the USA and Europe [1].

As with many other climate-sensitive diseases, there is a concern that even small increases in temperature could have dramatic implications for the distribution of dengue. As early as 1997, Jetten and Focks [2] were building temperature-based models that showed large swathes of North America and Europe colonised by dengue by the middle of the 21st century. Although climate projections have become more accurate and our understanding of how temperature affects the mechanisms of dengue virus transmission has improved, our future projections of dengue have had an almost singular focus on climate as the only cause for future expansion of the virus [3].

However, there are lots of factors that have contributed to the past global expansion of dengue and, at least so far, we think climate change has played a relatively small role [4, 5]. Factors such as urbanisation, spread of the mosquito species and wealth (as a proxy for ability to control dengue) are also expected to undergo significant change over the next century and often at a faster rate than climate. Detailed databases on how the distribution of dengue and its mosquito vectors have changed over time are also now available [6] and these can be used to reconstruct historical patterns of spread and validate model predictions. We believed this growing availability of data and increasing understanding about how dengue spreads justified a more nuanced approach to projecting the future distribution of dengue [7].

Surprisingly, when we took into account this broader range of factors, our predictions suggested only minimal changes in the overall future geographic distribution of dengue [7]. We expect some minor expansion beyond the fringes of the current distribution but predicted an almost complete absence of dengue in Europe even under pessimistic emissions scenarios. However, our predictions were not all good news. Even a minor expansion of dengue in southern China has implications for hundreds of millions of people. A major effort is currently underway to avoid the disease becoming endemic in Guangdong province [8] and this area is likely to become a key battleground in future efforts to contain dengue spread.

Even though we predict minimal change in dengue’s global distribution, we still predict the population at risk of dengue to grow by 1-3 billion by the year 2080 [6]. This is due to the growth in population in areas where dengue is already endemic. This growth will also be most pronounced in areas least able to cope with the expanding disease burden, such as rapidly urbanising sub-Saharan Africa where dengue is currently only sporadically reported.

Figure 2: The global distribution of dengue in 2020 (A) and projected expansions and contractions by 2050 (B) as predicted by MessinaBrady et al. [7].

Our hope is that future research on dengue and climate change can expand to include mitigation strategies for those in endemic areas, in addition to assessing the risk of spread to western nations. The inescapable message is that dengue will present an ongoing global threat for the foreseeable future. Containment of this emerging infectious disease no longer seems like a feasible option. Instead, a coordinated control campaign to lessen the worst effects of the disease in the most vulnerable populations may be a more feasible option and a prerequisite for the more ambitious goal of reversing the global spread of dengue. 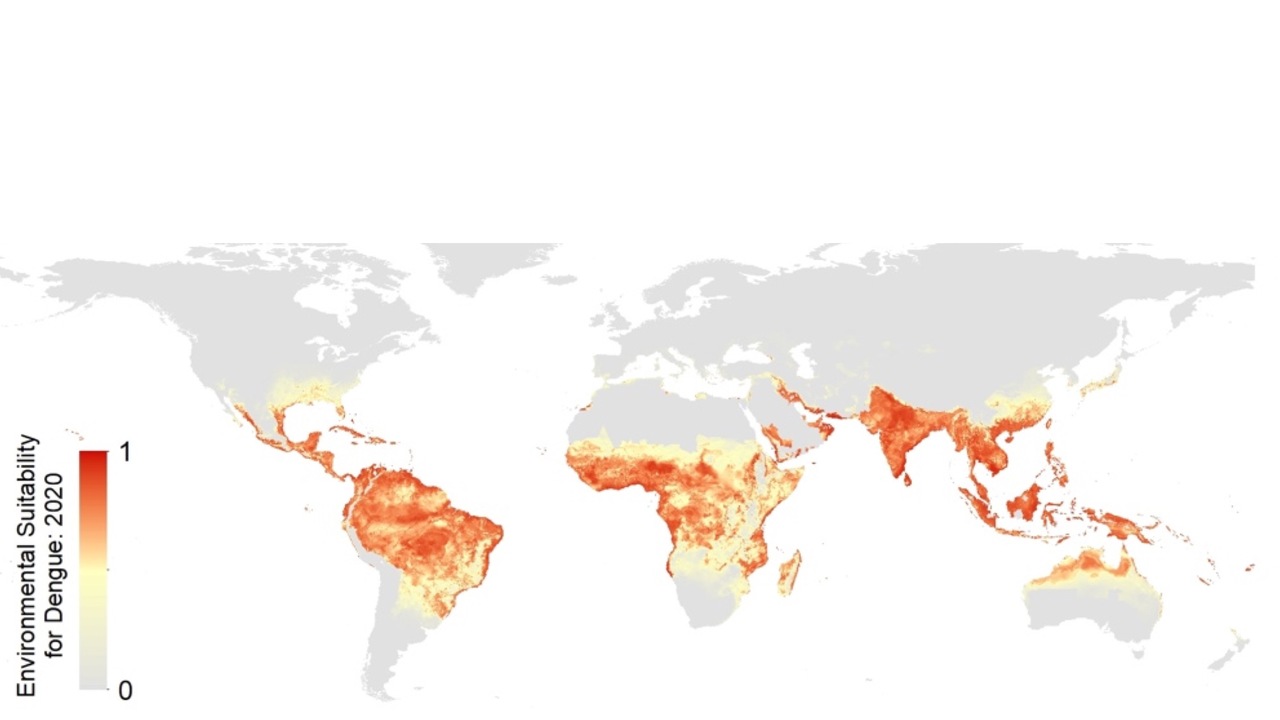 The spread of dengue in a changing world