How popular is the poo-poo emoji?

People have heard about blood donation, you give your blood to save someone’s life. But what about donating your poo? Could you save someone’s life with poo? What are the consequences of poo donation?
Gayetri Ramachandran
Creator, Microtalks
Follow
Like Liked by Jennifer Hallam
0

A stool bank is an interesting new establishment growing across the globe, one such bank is Open Biome. While in Paris, a stool donation campaign took a disastrous turn last year, when doctors at the Hospital St. Antoine received thousands of respondents and thus, stopping their plan of founding a stool stock in France.

So is microbial therapy or bacteriotherapy the future of treating diseases?

Over the last few years, gut microbiota is increasingly recognized as having fundamental roles in human physiology such as strengthening gut integrity or shaping the intestinal epithelium, harvesting energy, protecting against pathogens and regulating host immunity. The microbiota has become the Holy Grail !

What we eat, our origins, antibiotic usage history, circadian cycle all have an effect on our gut-microbial composition and diversity. We analyse the bacterial content by performing a metagenomic analysis on our feces (it may be still possible to participate in the American Gut Project or British Gut Project). It has been shown that our intestine harbours 4 main groups of bacteria  Firmicutes, Bacteroidetes, Actinobacteria, and Proteobacteria and there is a skewed composition in case of diseases like inflammatory bowel diseases, metabolic disorders like obesity, type 2 diabetes, etc.

As said before, feces contain millions of living bacterial cells (fungal and viral cells also). Feces could be considered as an indicator of good health. Have you ever heard of the Bristol stool scale? If not, this is a classification of stools (7 different types) based on their consistency. Furthermore, stool consistency is a signal of the microbial load and one study demonstrated that the transit duration of feces in the large intestine defines the bacterial diversity. When defecating we shed out a portion of the bacteria residing our intestine, although certain researchers are doubting the representation of the gut by our stools. Nevertheless, stools harbour the maximum bacterial content of the intestine and are now being considered as a therapeutic drugs by Food Drug Administration.

So how would you use stools as drugs?

Bacteriotherapy (also known as Fecal transplant (FMT)) implies replacing the bacterial content of the patient’s intestine with a healthy donor feces. This is being used for treating patients suffering from recurrent Clostridium difficile infections (CDI) and Inflammatory Bowel Disorder (IBD) (for the moment). According to Centers for Disease Control and Prevention, 15,000 Americans suffer from CDI while 1.6 million Americans have IBD. This therapy can potentially save millions of lives. FMT is performed by enema, oral capsule, or endoscopic delivery modes or even colonoscopy during which the donor stool is delivered into the recipient's colon.  Moreover, the rate of success of fecal transplant is about 90% for CDI and for IBD, FMT is safe but the efficiency is variable.

How can you donate feces?

Feces donation is not as easy it sounds. There are more stringent conditions for donation than say a simple blood donation. The list includes- No history of chronic gastrointestinal tract disorders, no antibiotic usage for the past 6 months, no high risk sexual behaviour or drug abuse, etc.

Currently, FMT clinical studies are moving towards the concept of super poo donors in United Kingdom. In parallel, super-poo donors could be considered as universal donors like donors of the blood group O. A study published in Frontiers in Cellular and Infection Microbiology showed that the success of FMT mainly depends on the broad diversity of the donor and the adjustment of the recipients diet. Larger the variety of bacterial species higher the acceptance. The efficiency also depends on the genetic background like in the case of organ transplant and diet of the recipient. Microbial dysbiosis has been coined to define the imbalanced gut community and different disorders result in different microbial composition, hence, patients have different responses to FMT. More clinical studies show that treating microbial dysbiosis is going to be more and more personalised and would depend on a donor-recipient matching approach.

Although, bacteriotherapy is emerging as a possible standard for therapy. It is fascinating to contemplate on the consequences and enigma of this therapeutic approach. Would be we able to change the patient’s behaviour? Their weight? Eating habits? Who could become a candidate donor? What would be perfect poo donation? Could this therapy standardised? How do you predict the results?

For me, there are quite a few questions unanswered and one needs to define all the parameters before making this treatment available to all. 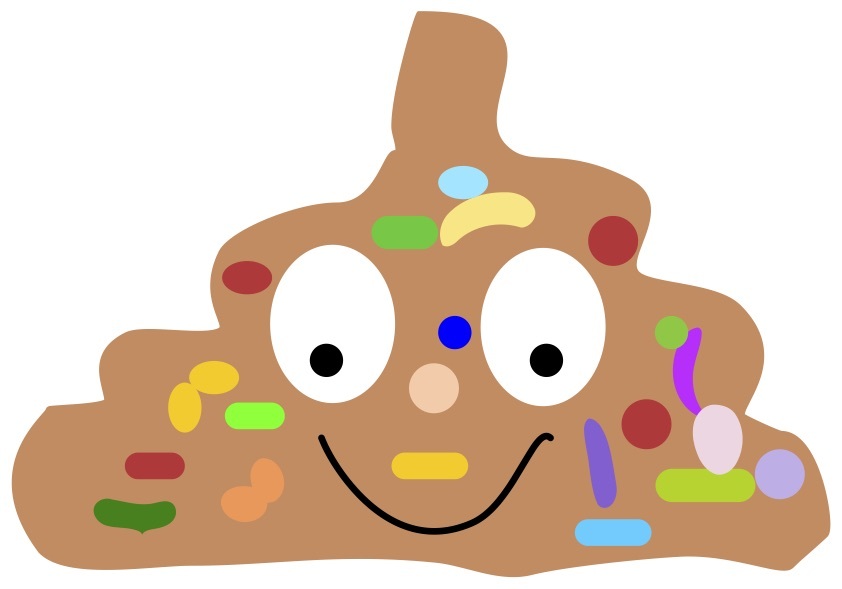 How popular is the poo-poo emoji?