The ADP-ribosyltransferase PARP11 promotes ubiquitination and degradation of the interferon type I (IFN-I) receptor IFNAR1 by mono-ADP-ribosylating the ubiquitin E3 ligase β-TrCP, thus suppressing the IFN-I-mediated antiviral responses both in vitro and in vivo.

My Ph.D. project is about immunoglobulin and tumors. At that time, I actually felt disappointed that the progress of antitumor therapy all over the world appears to be so slow. Another thing that touched me was the outbreak of SARS virus infection in 2003. People were under the threat of SARS viruses and there were no effective drugs. Chinese traditional medicine highly advocates “FuZheng”, which, I guess, means holding up positive regulation of the body, such as host immunity. Thus, I went on to a laboratory at the University of Pennsylvania working on interferon (IFNs) antiviral and antitumor immunity, where I felt the charm of science and was confident that science can benefit human health.

Subsequent years, various viruses, including Ebola virus, Zika virus and influenza virus, broke out worldwide without a stop. Many patients died before new drugs specifically targeted these viruses have been developed. Therefore, when I set up my own laboratory at the Soochow University, I devoted myself enthusiastically to the study of host broad-spectrum antiviral immune regulation. I think that the host has developed a lot of complex antiviral mechanisms in the long evolutionary process. Thus, we believe that if we understand host antiviral mechanisms, we can take full advantage of these mechanisms to fight against virus infection. We even can modify these antiviral mechanisms to achieve more potent antiviral activities. More importantly, as compared with the specific antiviral drugs developed recently, most of the host antiviral regulations possess broad-spectrum antiviral effects, which are especially important to cope with frequent mutations of viruses.

Based on these considerations, one of our projects is to screen the FDA-approved drugs, aiming to find those drugs that may have excellent broad-spectrum antiviral activity, and further reveal their mechanism of action. Through many scientific attempts, we noticed that the inhibitors of ADP-ribosyltransferase PARPs can significantly enhance the broad-spectrum antiviral activity of IFNs.

IFNs can be rapidly produced by host cells to fight viruses during viral infection. However, IFNs antiviral efficacy is usually largely damaged by viruses or cellular feedback pathways, which results in the fact that virus-induced IFNs, as well as exogenous IFNs treatment, are far from stopping virus infection in host. Thus, IFNs antiviral efficacy needs to be exploited as fully as possible. Given that we found the effect of PARP inhibitors in IFNs antiviral activity, we further explored the underlying mechanisms. After more than five years of efforts, we finally revealed that the PARPs family member PARP11 modulates the ubiquitin E3 ligase β-TrCP, which largely controls cellular levels of type-I IFNs receptor IFNAR1, thus determining IFNs signaling and antiviral efficacy.

We are happy that we have made a little progress in exploring broad-spectrum antiviral strategies. We are expecting to find more potent strategies to fight virus outbreak or at least help win valuable time for development of specific antiviral drugs or vaccines. We believe that in the near future human will no longer be so frightened of viruses, even those not-well-known viruses. 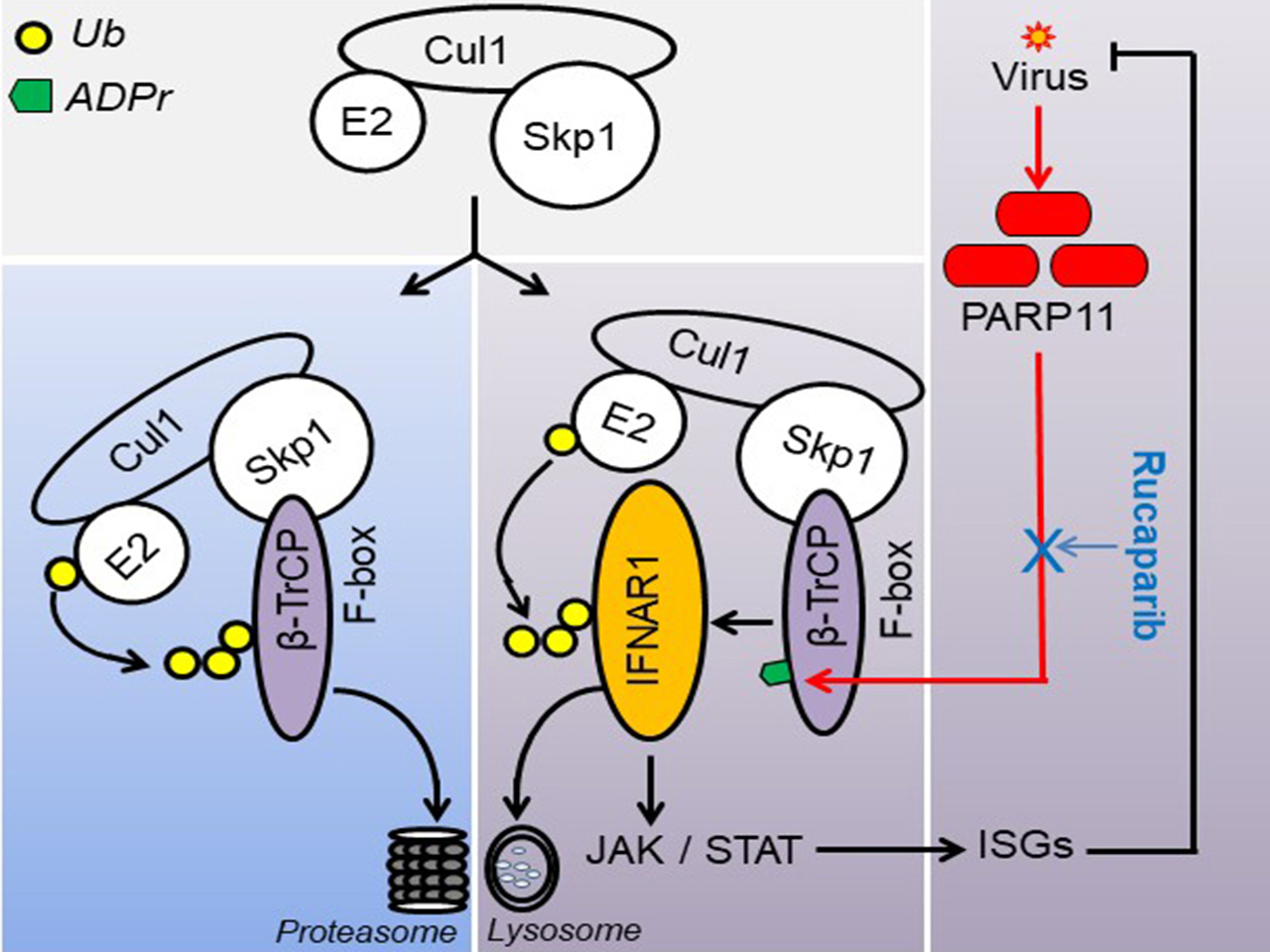