Evolution regards changes in genotype (DNA sequence) across time. Mutations arise in few individuals, and may either perish if they reduce the organism’s fitness, or enrich if advantageous.
Dan Tawfik
Professor , Weizmann Institute of Science
Follow
Like Liked by Claudio Nunes-Alves
0

The study of the impact of mutations in the glutamate dehydrogenase enzyme from Bacillus subtilis across multiple settings, including liquid cultures, biofilms and in soil, highlights how bacterial growth states and the environment can differentially impact protein evolution.

Evolution regards changes in genotype (DNA sequence) across time. Mutations arise in few individuals, and may either perish if they reduce the organism’s fitness, or enrich if advantageous. Ultimately the best mutation wins, and the population acquires a new genotype that is better adapted. Understanding the factors that dictate sequence evolution is a fundamental yet still unresolved question. We addressed some aspects of this question by performing evolution in the laboratory.

The dominant model for performing evolution in the laboratory is the domesticated Escherichia coli. However, laboratory-domesticated bacteria are ‘boring’ organisms that lost the versatility of natural wild-type bacteria. Foremost, domesticated bacteria usually do not form biofilms – bacterial communities where cells are attached to surfaces. Biofilms represent the most common bacterial state in nature, where cells, depending on their location, have different metabolism, form and division rate. We surmised that evolution in such complex, heterogeneous environments proceeds very differently to a domesticated bacterium grown in homogenous liquid cultures. We thus chose Bacillus subtilis, a “high social IQ” bacterium that forms spores, can grow in liquid as dispersed individual cells, and also in biofilm communities placed on agar plates or plant roots. We generated a collection of mutants of a single gene. This tailor-made population, where many different mutants co-exist, was allowed to grow in different laboratory-controlled environments. We then determined which mutants lost and which ones won.

We ran our experiments is replicas, namely, we competed the very same population in identical, parallelly grown cultures. What began as good experimental practice (somewhat over-pedantic) eventually became the crux of our findings. Competitions in dispersed, homogenous cultures, looked as expected – the effects of mutations were highly reproducible (a given mutation would lose or win in all parallel cultures). However, when the biofilm data came in, each replica looked different. We became suspicious - maybe the bacilli, or one of us had had too many tequilas! But regardless of how many times and how carefully we repeated the biofilm competitions, irreproducibility was reproducible. So one key conclusion was that whereas in homogenous cultures the fittest prevail (the most advantageous mutations win), the biofilms are more of a Russian roulette  – the somewhat fit and luckiest win.

Another key insight is that fitness is not an absolute measure, but rather relates to a specific growth condition and environment. Nearly all mutations exhibited opposing effects in different environments – they won in one but lost in another. This phenomenon dubbed pleiotropy is known, still, we stunned by how prevalent it was in our experiments. Thus, per each individual condition, many mutations were beneficial, but not a single mutation could outcompete wild-type across all conditions. The wild-type gene sequence therefore seems like the best compromise across all conditions. This may explain why, although mutations frequently come and go (polymorphism), the sequence of our tested gene would be identical if picked up in Israel or in Cuba, today, hundred years ago and likely in hundred years to come. 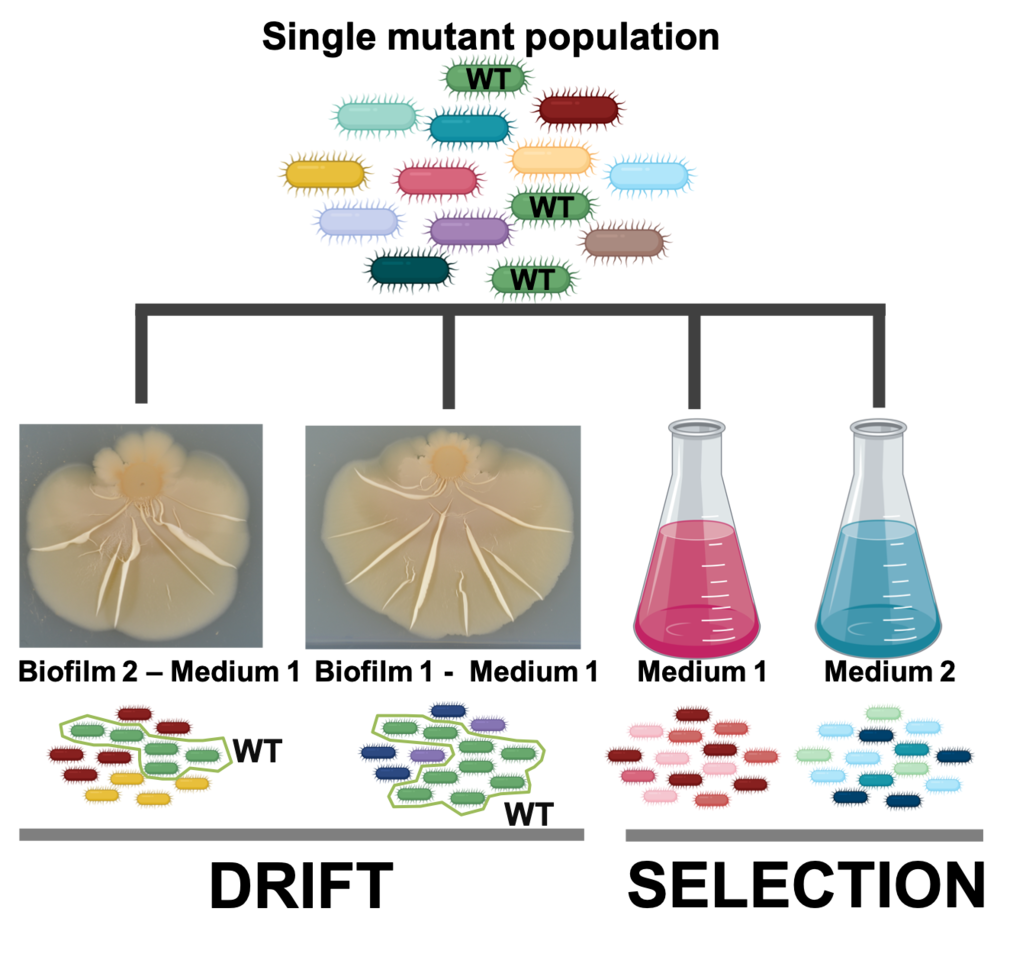 Evolution regards changes in genotype (DNA sequence) across time. Mutations arise in few individuals, and may either perish if they reduce the organism’s fitness, or enrich if advantageous.