Accidents are inevitable. In microbiology, underground metabolism results when a promiscuous enzyme reacts with non-canonical substrates. In some cases, these accidents can lead to toxic products. I have discovered an instance in which a typical central-carbon metabolite is inadvertently converted into a toxic, dead-end compound, 4-phosphoerythronate (4PE).

It all began with the question of why cpgA mutants, lacking a GTPase known to be involved in ribosome assembly, are sensitive to beta-lactams? When I isolated cefuroxime resistant suppressors of cpgA mutants using a transposon library, to my surprise I found that loss of a glucose transporter increased resistance to antibiotics. This led to the unexpected finding that cpgA mutants are intoxicated by glucose, and showed a zone of inhibition around a glucose-impregnated disk. A second round of genetic selections, together with some informed molecular sleuthing, led to the discovery of a “promiscuous” reaction in which GAPDH reacts with erythrose-4-phosphate to generate noxious 4PE. We further document that CpgA, in addition to its GTPase activity, has broad specificity phosphatase activity and is required to detoxify 4PE produced by "accidental metabolism."

Key findings of this work has also been documented in higher organisms such as yeast and mammals, but in my model 4PE has a domino effect by inhibiting 6-phosphogluconate dehydrogenase (GndA) activity causing the build-up of 6-phosphogluconate (6PG). Accumulated 6PG in turn blocks phosphoglucose isomerase (Pgi) and thus affecting energetics and cell-wall synthesis. Together, this blockage of pentose phosphate pathway and glycolysis leads to metabolic gridlock (as shown below).

Describing the project now seems like a fortunate accident comprising of whole-genome re-sequencing, long hours of sample preparation for metabolite measurements, many helpful discussions with lab-mates, taking a flyer on ideas no matter how crazy they seem, frequent visits to the SubtiWiki database, pep-talks, and a reward of beer.

Unraveling the CpgA story has strengthened my personal belief in following my scientific intuition as a scientist! I vividly remember feeling stuck with series of compelling evidence on cpgA mutants being hypersensitive to antibiotics and glycolytic carbon sources, but not having a complete snapshot of what exactly had malfunctioned in the absence of this GTPase. My intuition was to generate an inducible library of central-carbon metabolism enzymes. I shared this idea with my experienced colleagues, and one suggested it might be an interesting approach, but is time-consuming and might be futile. Later in the evening, while driving, and listening to the encouraging song of Frank Sinatra playing in the background, overexpression didn’t seem that reckless and laborious. During the following weeks I found out that Pgi, GndA, and GntZ expression helps support cpgA mutant growth on glucose.

“Misbehaving teenagers” as my undergraduate assistant, Diana Herrera likes to call cpgA mutant cells for its non-competent, slow growth, sensitivity to antibiotics, morphological deformities has opened various opportunities for me. Whether it is to present and win conferences, create a niche for myself in the lab, and most importantly made a friend (Elena) in metabolomics facility.

P.S. This picture was taken while Diana (right) and I (left) were doing science related to CpgA project. 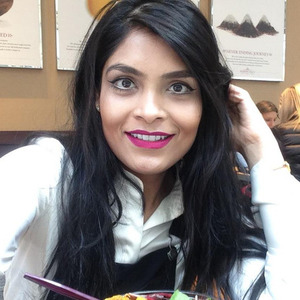