While exploring host immune regulation of one of our lab's favorite intestinal viruses, norovirus, we were shocked to find that several lines of highly immunocompromised mice were somehow completely resistant to infection. What host or microbial factors could be protecting the mice from this highly infectious pathogen?
Megan Baldridge
Assistant Professor, Washington University School of Medicine
Follow
Like Liked by Ben Johnson and 3 others
0

This study highlights the impact of the gut virome on host immunity by showing that a specific strain of murine astrovirus in the gut of immunodeficient mice protects them against norovirus and rotavirus infections, and that this protection depends on interferon-λ signalling in gut epithelial cells.

By Harshad Ingle and Megan Baldridge

In recent years there has been a revolution in our understanding of how much the trillions of microbes, referred to as the microbiota, living in our body affect us. Much emphasis has been given to unraveling the plethora of functions associated with gut bacteria in controlling health, and we are beginning to understand that an imbalance in the quality or quantity of bacteria can lead to diseases by modulating metabolism or immune responses. However, our understanding of the effects of gut viruses on health has lagged far behind.

In the Baldridge lab, we are fascinated by the world of microbes and their potential to alter responses towards various pathogens. By chance, we uncovered a totally unexpected phenotype in immunodeficient mice infected with mouse gut pathogens such as murine norovirus (MNoV) and rotavirus. Surprisingly, despite being markedly immunodeficient, these mice were fully protected from infection by these pathogens. We were enthusiastic to uncover the mechanism underlying this paradoxical finding.

In a lab that focuses on the microbiota, we were of course motivated to determine whether this phenotype was driven by some unique host response, or by the presence of a microbial factor. We performed fecal transplants, and found we were able to transfer protection to a new immunodeficient host, but not to wild type mice. Our first realization that the ‘gut virome’ could be playing a part was serendipitous. Fecal filtrate, obtained by passing fecal samples through a 0.22um filter, was also sufficient to provide protection. This was an exciting result that propelled us to focus more exclusively on potential viruses.

With the help of next generation sequencing, we identified a new strain of another common gut virus, murine astrovirus (STL5), which was only present in the protected mice. STL5 was absent in mice from different vendors such as Jackson Laboratories and Taconic, suggesting the emergence of STL5 in the breeding facility at our institution.

While this correlation between murine astrovirus and protection was intriguing, we wanted to test causation as best we could, though we were limited by the absence of any cultivation system for murine astrovirus or any previously-described method to cure mice of infection. In a series of experiments aimed at confirming causation, we found that by using neutralizing antibodies against murine astrovirus or abolishing immunodeficiency by transplantation, we were able to eliminate STL5, and in turn, protection from MNoV.

Mice protected from MNoV showed a higher baseline expression of interferon-lambda (IFN-λ), an important antiviral factor for controlling virus infections at barrier surfaces. We found that IFN-λ was essential for STL5 to provide protection. By eliminating IFN-λ signaling specifically in intestinal epithelial cells, we were able to abrogate protection even in the presence of STL5, indicating that IFN-λ was central to the protective mechanism.

Several questions emerged during the course of our study. A key question for our group is the cellular tropism of murine astrovirus. What allows STL5 to sustain these high levels of IFN-λ that are so potently inhibitory to MNoV and rotavirus? What is special about STL5 for induction of this protective response, and what viral genes driving expression of IFN-λ? Do MNoV and STL5 have different cellular niches, or are they in direct competition? And can we expect to find distinct gut viromes in immunodeficient human patients that may confer similar protective benefits?

Our study opens up exciting avenues for future research exploring the role of gut viral elements and viral evolution in regulation of infection, with the potential to identify novel strategies to combat common gut pathogens. 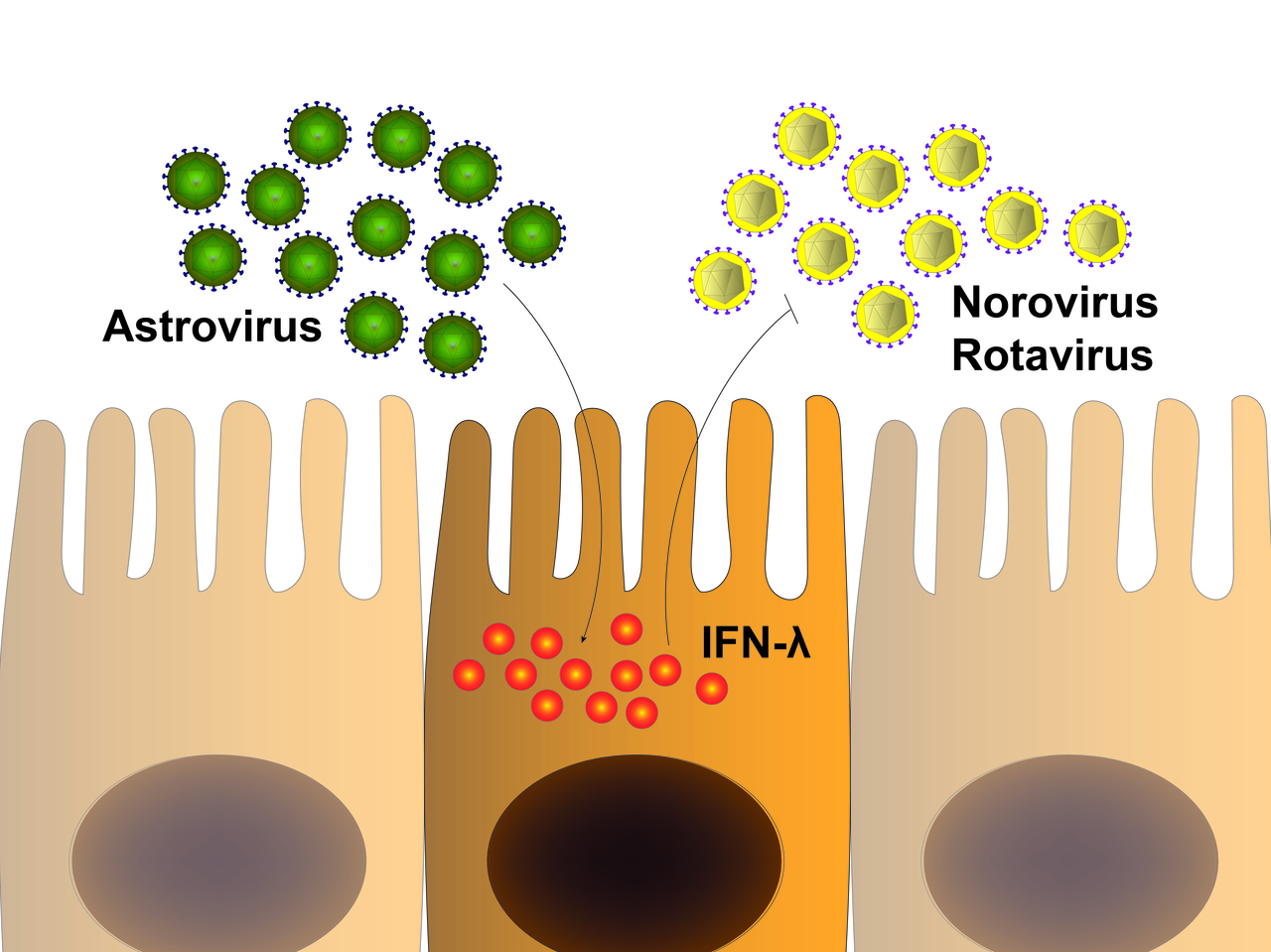 While exploring host immune regulation of one of our lab's favorite intestinal viruses, norovirus, we were shocked to find that several lines of highly immunocompromised mice were somehow completely resistant to infection. What host or microbial factors could be protecting the mice from this highly infectious pathogen?