Unveiling the mysteries of dengue and Zika genome organization

Mosquito-borne infections are common and deadly in tropical and subtropical regions around the world. Estimates suggest up to 700 million infections and over 1 million deaths are caused by a variety of mosquito-borne viruses. Moreover, changes in climate are causing an expansion of the habitats of the mosquitos to the north and south and bringing an ever increasing number of people in contact with these diseases. One major class of mosquito-borne viruses are the Flaviviruses, which include dengue and Zika viruses. These viruses are positive strand RNA viruses which utilize their genomes for replication and translation. Studying the structure and function of these viruses genomes is key to understanding their pathogenicity.
Yue Wan
Senior Research Scientist, Genome Institute of Singapore
Follow
Like Liked by Ruth Milne
0

Here, the authors provide detailed analyses of viral RNA structure in virions and in infected cells for four dengue virus serotypes and four Zika virus strains, and identify conserved structures that are important for virus replication.

By Roland Huber and Yue Wan

Dengue is a well known human pathogen and affects more than 390 million people around the world.   Singapore is one of the hotspots of dengue infection. Every year, 2000-3000 people are infected by dengue in Singapore. Whilst most of these cases are fairly mild, dengue associated deaths still occur each year. The government has taken a broad array of measures to try to decrease the incidence of dengue, e.g. by running national campaigns to reduce their potential breeding sites, such as minimizing presence of still water, including those found in garden pots, and performing frequent fumigation to kill mosquitos. The nation also conducts constant surveillance to inform of the public about the locations of dengue infections to enable residents in the affected areas to stay indoors or use insect repellent sprays outside.

When Yue returned to Singapore to start her lab, she was deeply interested in understanding RNA conformations, their functions and how they could be targeted. The dengue virus caught her attention almost immediately because its genome is made of RNA that is extensively folded, few therapies exist, and is on the hearts and minds of almost every Singaporean. Through one of her colleagues, Paola Sessions, we got in touch with some of the leading dengue biologists in Singapore, including Ooi Eng Eong and October Sessions, who then provided us with pure virus samples to do the structure experiments. Our initial plan was to investigate the structural similarities and differences among the four serotypes of dengue virus in order to identify which regions are structurally conserved. However, during the course of our project, the Zika pandemic of 2015-2016 prompted us to include a comparison with this related class of viruses that is also endemic to Singapore, but had hitherto not been a high priority due to the generally limited severity of the disease. Reports of severe adverse health effects observed in South America and linked to Zika infections prompted renewed interest and we were able to obtain a variety of strains to compare and contrast with dengue, which ultimately helped us to identify peculiarities of dengue in contrast to features shared across the wider Flavivirus family. We eventually performed structure probing and pair-wise interaction mapping across all for dengue serotypes (DENV1-4) and 4 Zika strains (originating in Africa, Brazil, Singapore and French Polynesia).

Besides the challenges of obtaining full length RNA samples and performing structure probing on the viruses, data analysis was a particular challenge to us due to the need to optimize structure modeling of these extremely long RNA genomes (11kb). We had numerous brain storming sessions with Adelene Sim and Roland Huber who were the main people behind all of the analysis. Because these genomes are so long, and are able to form extensive alternative folds, we had to come up with new ways to integrate local secondary structure information with pair-wise interactome information into structure modeling.  Eventually we came up with diverse structure models that were constrained using local structure probing, but selected for best fit to pair-wise interactions.

These models became immensely interesting to us because comparing across 8 viruses, it was clear that there are conserved and potentially important structural regions in the dengue and Zika genomes. In addition, we found many long-range pair-wise RNA interactions that were also shared across the genomes. However, whether any of these structures or pair-wise interactions actually had functional impact on virus fitness was largely unknown. To address this question, Xin Ni Lim from Yue’s lab worked with Wy Ching Ng from Eng Eong Ooi’s lab to perform mutagenesis experiments and to examine the effect of disrupting pair-wise RNA interactions in Zika growth. We observed that the viruses are attenuated upon structure disruptions, indicating that the interactions are important for virus fitness. Sylvie Alonso’s lab further helped us inject wildtype and mutant viruses into interferon deficient mice to show that the mutant viruses indeed show attenuation in vivo.

Having structural maps of dengue and Zika is only the first step to understanding their biology.  While we have shown that many of these structures are likely to be functional, more detailed studies need to be performed to better understand how structural mutations attenuates the virus and the roles that different structures play during the virus lifecycle.  Additional experiments also need to be performed on other Flaviviruses to study the extent to which structures are shared among members of the family.  High resolution structure analysis also needs to be performed on functional structures to be able to start designing small molecules against them. While our work lifts the lid on the black box of dengue and Zika structures, much remains to be done and learnt about these important viruses and how we can target them. 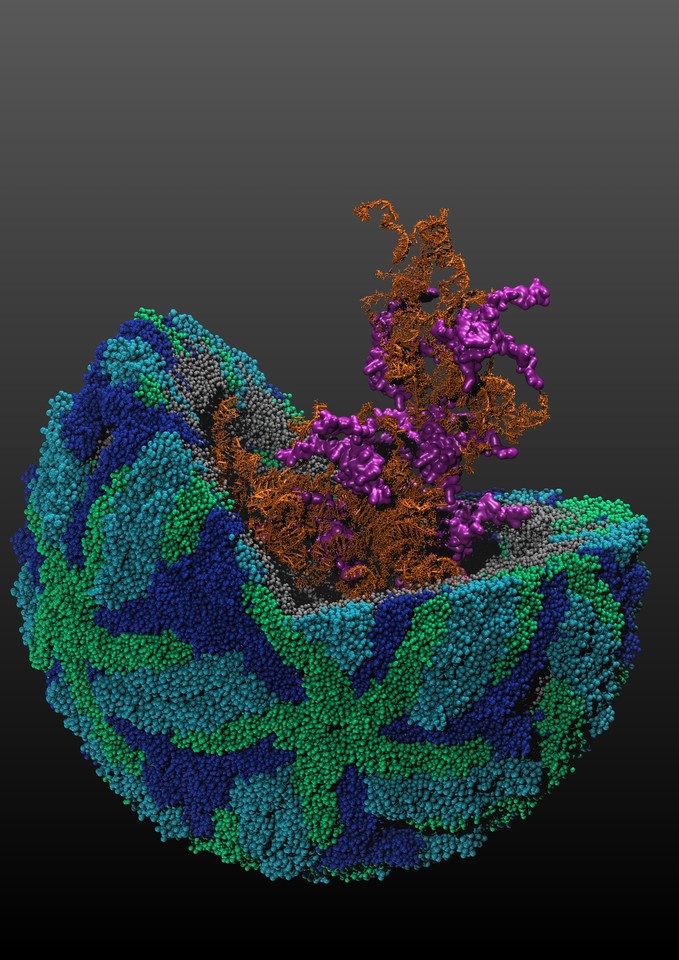 Unveiling the mysteries of dengue and Zika genome organization

Mosquito-borne infections are common and deadly in tropical and subtropical regions around the world. Estimates suggest up to 700 million infections and over 1 million deaths are caused by a variety of mosquito-borne viruses. Moreover, changes in climate are causing an expansion of the habitats of the mosquitos to the north and south and bringing an ever increasing number of people in contact with these diseases. One major class of mosquito-borne viruses are the Flaviviruses, which include dengue and Zika viruses. These viruses are positive strand RNA viruses which utilize their genomes for replication and translation. Studying the structure and function of these viruses genomes is key to understanding their pathogenicity.