Let it go, let it go: the release of bacteria from biofilms in drinking water pipes.

Drinking water pipes are covered in biofilm. But do the bacteria living there ever leave, to enter the drinking water and come to our taps? The installation of ultrafiltration gave us the chance to count and identify these bacteria in a full scale drinking water distribution system in Sweden. That work was recently published in npj Biofilms and Microbiomes.

As a researcher, I want to work to understand and improve the world we all live in. However, as a microbiologist focusing on specific molecules, amplification cycles or growth curve dynamics, this can sometimes feel like a rather theoretical and distant goal to fulfill.

And then comes a great day. Dr. Alexander Keucken, research director at a nearby drinking water treatment plant, contacted us with a direct and clear question. They would soon add ultrafiltration, a process that removes virtually all bacteria from water, to their drinking water production. But if nature abhors a vacuum, and the use of ultrafiltration would remove the majority of these cells, what would happen to their drinking water? Pipes that transport water are coated in biofilm and Dr. Keucken’s concern was that this layer would react to the ultrafiltration by literally falling off the pipes. Since biofilm may be a reservoir for pathogens, this was a serious concern that could directly impact the health of the consumers, ironically as a result of improved treatment from the installation of the ultrafilters. Dr. Keucken wanted to know if we would be willing to keep an eye on the water using one of our favourite techniques, flow cytometry with DNA staining. We could count the cells in the water and any drastic changes in its microbiology would be visible within a very short experimental turn-around time.

We jumped at the chance and, after some thinking, realized that this was an unprecedented opportunity to see which bacteria were leaving the biofilm and entering the drinking water. Most distribution systems transport water with high numbers of cells which prevents the identification of those originating in the biofilm against a high background of diversity. However, when most cells would be removed by the ultrafilter, the impact of the biofilm on the water microbiome would suddenly be visible: the clouds in the sky would be gone and the clear stars would shine out.

Real life is never as simple as well-planned experiments, you can’t go back in time and you have to work with the samples you have. While the drinking water had been treated by ultrafiltration, the water used to adjust the pH was not initially included, and this landed up adding a very low background of cells. The now Dr., but at the time PhD student, Sandy Chan went to work with her bioinformatics skills, hard work and creativity, and extracted the DNA sequences to identify the bacteria from the biofilm, and with the flow cytometer we could see that not many of these bacteria at all were entering the drinking water from the pipe biofilm. This was a great relief to Dr. Keucken and everyone else at the drinking water treatment plant. The collaboration with academia and industry made for great science, as well as a fascinating story to tell, about something that is happening every day as our drinking water makes its way to our glass.

And with apologies to Elsa, and the whole crew in Arendelle, we note that this study was only conducted in winter and we still want to see what pipe biofilms do in summer.

The complete story was recently published in npj Biofilms and Microbiomes (https://www.nature.com/articles/s41522-019-0082-9). 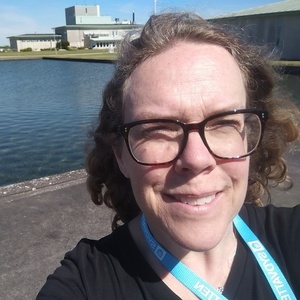