The biogeochemical uncoupling of permeable sediments

My fascination with the functioning of permeable sediments started during my post doc at the Max Planck Institute for Marine Microbiology with Markus Huettel. Markus really drove a paradigm shift away from the idea that sands were biogeochemically dead because there were such small concentration changes of metabolites in sands.
perran.cook@monash.edu
Professor, Monash University
Follow
Like Be the first to like this
0

In sandy, permeable sediments, which frequently cycle between oxic and anoxic conditions, there is an uncoupling of fermentative and respiratory bacteria, and bacterial, rather than microalgal, fermentation drives the accumulation of hydrogen in this environment.

Instead his work showed that rapid water flow through these permeable sediments meant that solutes did not have time to accumulate or become depleted.  Along with his former PhD student Elimar Precht, he captured the amazing dynamics of oxygen in sediment (1), see also Figure 1 below.

How do micro-organisms metabolically adjust to this dynamic oxygen environment?

The immediate assumption based on the paradigms of biogeochemistry is that once oxygen is depleted, microbes will switch to other electron acceptors such as iron, manganese, nitrate and sulphate in order of their free energy yield.  My suspicion that this was not the case arose over a decade ago, when I was playing with biogeochemical models set up with the classical redox cascade.  They always produced too much denitrification and sulphate reduction, and in the case of denitrification we had to introduce a fudge factor to make the models work, much to the disgust of my collaborator Filip Meysman (2,3).  More recently, we showed that under anoxic conditions, metabolism continues in sand but we could not measure any significant rates of denitrification, sulphate or iron reduction. Curiously, we observed high rates of hydrogen production leading us to speculate that fermentation was taking place (4).  We started looking for hydrogen in-situ within sand and the overlying water and found concentrations orders of magnitude higher than previously reported.  Fortuitously, I was on sabbatical in Utrecht and was introduced to Elena Popa, who has undertaking state-of-the-art isotope measurements on hydrogen. Her measurements were able to show unambiguously the hydrogen was coming from a biological source.  Metaganomics confirmed the abundance of hydrogenases in the sediment and of key importance showed they were consistent with hydrogen production by aerobic facultatively fermentative bacteria.  Further incubations confirmed sulphate reduction did not commence for about a week after anoxia and this coincided with a shift in the bacterial community towards a greater abundance of sulphate reducers.

Figure 1.  Shows the dynamics of oxygen within rippled permeable sediment in a flume tank with changing flow velocities and direction simulating the rising and falling tide (6 hour timescale).  Red denotes high oxygen, black no oxygen.  Our work sheds new light on how microbes cope with this dynamic redox environment.

The key point here is that sand sediments are inhabited by aerobic bacteria which are facultatively anaerobic, and carry out fermentation under anoxic conditions.  It is only after prolonged anoxia (days-weeks) that a new sulfate reducing community develops and dominates metabolism. This has important consequences for how we set up biogeochemical models of permeable sediments and raises the question as to what type of fermentation pathways are taking place in these sediments during short term anoxia. 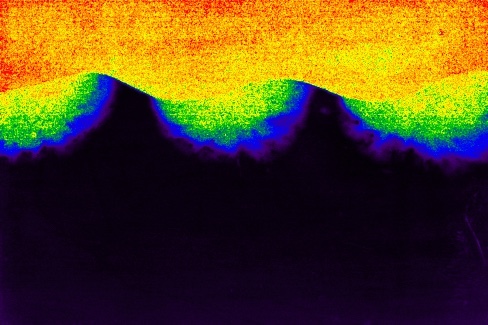 The biogeochemical uncoupling of permeable sediments

My fascination with the functioning of permeable sediments started during my post doc at the Max Planck Institute for Marine Microbiology with Markus Huettel. Markus really drove a paradigm shift away from the idea that sands were biogeochemically dead because there were such small concentration changes of metabolites in sands.