Paula B. Matheus Carnevali
Postdoctoral Scholar, University of California, Berkeley
Follow
Like Liked by Cesar Sanchez and 2 others
0

Most cyanobacteria are oxygenic photoautotrophs, and fermenters under dark anoxic conditions. Here, the authors analyse genomic sequences of related uncultivated bacteria, inferring their metabolic potential, and supporting that their common ancestor was an anaerobe capable of fermentation and H2 me…

The first time I saw bright colored lichen in my explorations of the high tropical Andean mountains in Venezuela I was fascinated. It was exciting to learn that lichens are symbiotic associations between bacteria (or algae) and fungi, so resilient that they can be found in other extreme environments (e.g., the Atacama Desert, the oldest and driest on Earth, and the Antarctic continent).

Cyanobacteria happen to be the bacterial partners in this association, and for no less reason than their highly versatile metabolism. As the autotroph in the partnership, Cyanobacteria fix carbon dioxide into organic matter providing a source of organic carbon for the heterotrophic fungi. In turn, fungi provide structural support, protection, and water, which is usually scarce in places inhabited by lichens. We’ll come back to this later…

Forward time, I had just started my postdoc in the Banfield Lab when we looked into the phylogeny of a metagenome-assembled genome (MAG). To our surprise the closest relatives in our database was a group of unclassified MAGs. The running name of this group in our database was RBX-1 [1], but soon after it was introduced as Margulisbacteria (after the evolutionary biologist Lynn Margulis) given its close phylogenetic affiliation to Cyanobacteria [2]. These organisms were most closely related to another group in our database originally known as WOR-1, whose MAGs were first identified among the White Oak River groups by Baker et al. [3]. Later, this group was introduced as Saganbacteria (after Carl Sagan, world renown astrophysicist and at one time married to Lynn Margulis) [4].

Concurrently, Frederik and Tanja had newly acquired single-amplified genomes (SAGs) from members of Candidate division ZB3 [5], including a putative bacterial symbiont of a marine protist (AAA071-K20) [6]. We soon realized that these groups formed a monophyletic clade with the sediment-associated Margulisbacteria, so we decided to join efforts. More importantly, Margulisbacteria and Saganbacteria were earlier branching lineages than Cyanobacteria and closely related siblings, Melainabacteria and Sericytochromatia.

Figure 1. Phylogenetic tree based on 56 concatenated proteins and shared protein families. a. Location of Margulisbacteria and Saganbacteria in a de-replicated species tree of the Terrabacteria. b. Phylogenetic relationship of members of the Margulisbacteria and Saganbacteria. Support values are not shown at nodes with maximal support (posterior probabilities >0.97). c. Shared protein families among lineages: rows cover the total number of protein families shared among lineages and dots indicate which lineages are being compared. At the bottom, bars show for each lineage the total number of singletons (unique to respective lineage) in brown, and the number of protein families that is shared with one or more lineages in gray.

Embarking on the investigation of Margulisbacteria and Saganbacteria allowed us to gain insight into any ancestral metabolism that may have remained encoded in these genomes. The emerging story was one of metabolic adaptation for harnessing energy at low redox potentials, with hydrogen and simple respiratory complexes being the key players, almost like the equivalent to metabolic versatility in Cyanobacteria but at the low energy end.

No wonder Cyanobacteria are so ubiquitous and able to thrive in extreme environmental conditions like those found in the high-tropical Andean Mountains. Their ancestors may have been experimenting in a variety of redox environments long before they turned into the organisms we know today. Aerobic respiration was just the most recently gained trait to take advantage of another one their own inventions, oxygenic photosynthesis. 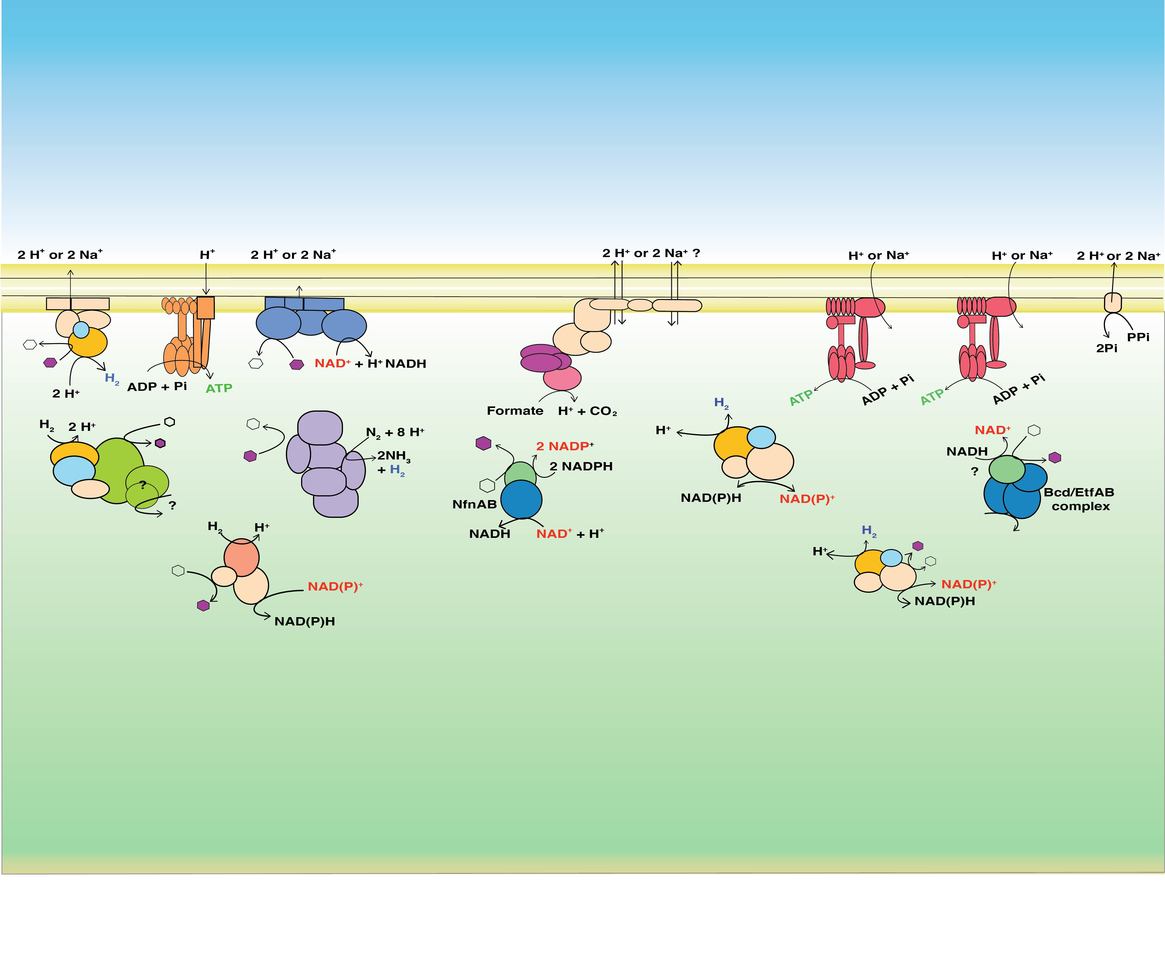