In our recent paper, we dissected the function of IFITM1, an ISG which we show has broad spectrum anti-viral function, linked to its location at the cell surface
John Tregoning
Author: Infectious. Reader in Respiratory Infections., Imperial College London
Follow
Like Be the first to like this
0

Before the immune system is activated, cells have their own intrinsic defence against viral infection. This comes in the form of proteins that can inhibit various stages of the viral life cycle. Some of these proteins are constitutively expressed and others are inducible – activated by signals from other infected cells as part of the early response to infection. Many of the proteins that provide this cell intrinsic immunity are expressed in response to signalling by a family of cytokines called interferons, in particular interferons alpha, beta and lambda. These antiviral genes are collectively known as interferon stimulated genes (ISGs). There are a large number of these genes (upwards of 300), but knowledge of what viruses they restrict and how they do it is limited, many genes have unknown functions.

In our recently published study we investigated the role of a specific ISG called IFITM1 (short for interferon induced transmembrane protein 1). IFITM1 is one of 3 IFITM proteins expressed by human cells and they appear to have a role in restricting early events in viral ifnection. We followed up previously published work, investigating where in the cell the protein was expressed and showed that unlike the better characterised IFITM3, IFITM1 was found on the plasma membrane, suggesting it prevents direct viral entry. We demonstrated that for a wide range of RNA viruses that infect the respiratory tract, including Respiratory Syncytial Virus, Influenza and Measles, increasing the level of IFITM1 in the cell reduced the level of viral infection. Interestingly we showed that IFITM1 was able to prevent infection with a virus with a DNA genome (Herpes Simplex Virus), suggesting IFITM1 function was associated with its cellular location rather than an effect on specific viral families. The importance of the location of the protein with in the cell was supported by studies that reduced the ability of IFITM1 to localise to the cell surface, leading to increased infection. These studies were supported by increased levels of infection in mice lacking the IFITM1 gene.

Understanding more about the function of interferon stimulated genes can help us to understand how viruses infect cells and may provide insight into strategies to prevent viral infections. In the case of IFITM1, we have shown that human cells make a robust anti-viral response at the cell surface and this can help to reduce viral infections. 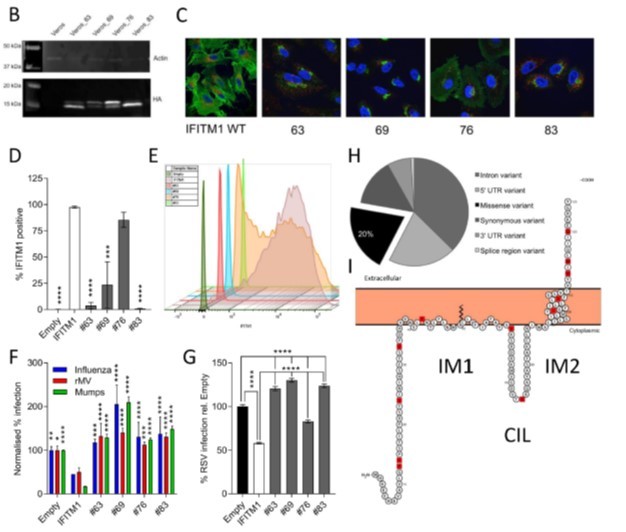 In our recent paper, we dissected the function of IFITM1, an ISG which we show has broad spectrum anti-viral function, linked to its location at the cell surface