It started with a spot: How Staphyloccocus aureus modifies its surface antigens

Staphylococcus aureus is major human pathogen. Its success relies on the multitude and redundancy of immune evasion strategies. In this behind the paper article we describe how a prophage-encoded glycosyltransferase was identified and how it is able to attenuate the immunogenicity of its substrate Wall teichoic acid.

The paper in Nature is here: go.nature.com/2S7EWHs

The University of Tübingen is located in southern Germany. Tübingen offers not only a picturesque medieval town but also a renowned University with a strong scientific profile. Research of Staphylococci, especially the human Pathogen Staphylococcus aureus has a long history of over 30 years in Tübingen. Our department, led by Prof. Andreas Peschel has been studying Wall teichoic acid (WTA) biosynthesis and physiology for over 10 years. Wall teichoic acid is an abundant, polyanionic glycopolymer, that is bound covalently to the peptidoglycan, as the name implies. It is involved in many processes of staphylococcal physiology and virulence. Over the recent years our group has been able to identify the glycosyltransferases that are further derivatizing WTA.

During my lab rotation as a student, my supervisor Guoqing Xia drew my interest to the microbial world of Staphylococci and their bacteriophages. I was assigned to the usual side-project that are left over and have not been investigated due to more urgent or promising matters: My task was to investigate whether a prophage-encoded glycosyltranferase, that was shorter but showed homology to the recently described glycosyltransferase, termed TarS, displays any enzymatic activity. After early steps in molecular cloning I was able to express the gene in a well-described S. aureus mutant, that is devoid of WTA glycosylation. Since bacteriophages of S. aureus utilize distinct WTA motifs as phage receptor, they are useful and simple probes to study the WTA-glycosylation state. So upon probing the complemented strain with sugar-recognizing phage lysate, we observed a plain spot in the bacterial lawn. This result, a simple hole, piqued our interest, since this indicated that the enzyme modified the WTA in a way that allowed phage infection.

From then on, as a PhD student, I worked mainly on this enzyme, which we later named TarP. During our study of TarP we collaborated with many great scientists, who contributed greatly to this work, making this publication truly interdisciplinary and international. Each collaborator provided an important puzzle piece to obtain the whole picture. A tremendous impact on our research was provided by my co-author Yinglan Guo from the group of Professor Thilo Stehle, who was able to solve the structure of TarP and thereby elucidate what makes TarP different from its homologue TarS in molecular detail. Initially, we were not sure whether TarP was just a “small TarS” because we observed that both enzymes were redundant in many physiological functions. However, the in-depth NMR analysis of the catalytic products of TarP and TarS by Cristina De Castro from Naples demonstrated that TarP is indeed a unique enzyme that glycosylates TarP with a different motif. Additionally, we were looking for a long time for a phenotype conferred by TarP that would increase the fitness of TarP expressing S. aureus. Previous work and current contributions by the group of Professor Bok-Luel Lee from Pusan, helped us to understand that WTA is an important epitope for recognition by human serum IgG. This led us to the observation that TarP-mediated glycosylation is able to lower the immunogenicity of the WTA antigen und thereby allows S. aureus to evade the adaptive immune system.

S. aureus is a truly remarkable bacterial pathogen. Its success in colonization during infection in human populations is largely caused by the multitude of different strategies that the bacterium employs to evade, repurpose or attack the human system. The immunogenic potential of WTA is far from completely understood, and it is important to continue studying the implications to promote the development of potential vaccines. 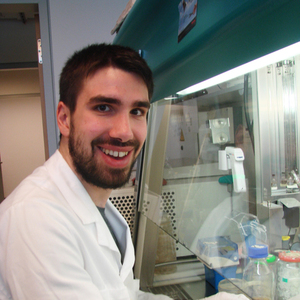