As a master’s or as an undergrad student, I did not have the chance to participate in the world-renowned synthetic biology competition called International Genetically Engineered Machine (iGEM). To fulfill this covet this year, I tried to work and mentor a team of young igemmers based in Paris. For people who are not aware of iGEM, it is an organization founded by the Massachusetts Institute of Technology dedicated to the expansion of synthetic biology, education, scientific competition and more so a bridge to communicate with the general public and researchers.
Gayetri Ramachandran
Creator, Microtalks
Follow
Like Liked by Ben Johnson and 1 other
0

I discovered iGEM, when I joined as a postdoc in a synthetic biology lab in Paris. I was overwhelmed by the enormity of iGEM community and its vast networks, enthralled by ex-igemmers and their fervor for creating, tweaking technologies to construct a better world for the future.

As a postdoc, it was too late for me to be part of an iGEM team!

But not too late to be a mentor!

Contacting the Centre de Recherches Interdisciplinaires Paris, led me to the iGEM Paris Bettencourt 2018, which is incidentally where the first French iGEM team was created back in 2006. I was open-heartedly welcomed to their center as one of the mentors for their iGEM team of 2018.

Over the last couple of months, we have been working on a pragmatic solution for the development of alternatives to antibiotics. These months have been quite a roller coaster ride for me, I believe for other team members as well.

My interactions with a bunch of zealous 24-25 years olds gave me a glimpse of “my younger days”!

Given my logistically situation, I was shuttling between my lab and their place of work, trying to make it to all the meetings without fail, sometimes that did not happen, sometimes I reached late, students reached later, so on and so forth!

There were the Eureka moments, the usual some stumbling down, quite a few disagreements, many joyous occasions and a few tear-jerking episodes, all leading to one huge competition at Boston (which I sadly did not attend).

But I was cheering for them from Paris!

I also realized the power of communication- whether it is within the team, with our teams, with the mentors or other scientists - it is the key for a productive working culture. Then there is time management, since there are only a couple of months to work on a project, managing a tight and strict schedule is essential, but you do often become lazy!

No doubt, the science behind the project is the heart and soul of iGEM, but you need to anticipate the speed breakers on the path, which are more often than you imagine! Running of out of material, breaking down of apparatus, losing time, lack of manpower, some chaotic thing after another, all mixed together but you can always find the silver lining somewhere during those daunting times, we just need to be patient!

Our team finally did win the GOLD MEDAL for their work on star-shaped antimicrobial peptides as alternatives to antibiotics. The team website should provide you with more details, about the projects, achievements and results. The students also published an article in French in the online journal Le Conversations, describing the current situation of the antibiotic resistance dispersal in context to the meat and meat-product industries in France.

In the end, winning or losing is part of a competition like iGEM, but I hope my team remembers the journey and the struggle that we took to reach our destination rather than just 4 days of the Giant Jamboree at Boston. 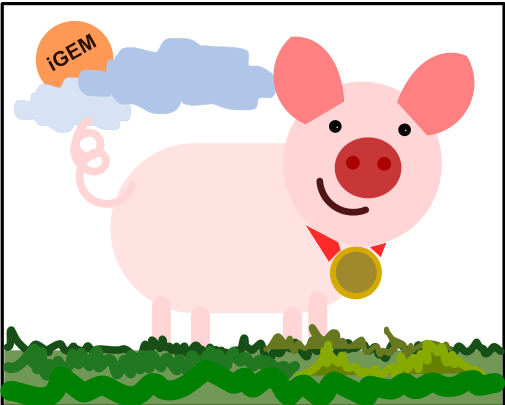 As a master’s or as an undergrad student, I did not have the chance to participate in the world-renowned synthetic biology competition called International Genetically Engineered Machine (iGEM). To fulfill this covet this year, I tried to work and mentor a team of young igemmers based in Paris. For people who are not aware of iGEM, it is an organization founded by the Massachusetts Institute of Technology dedicated to the expansion of synthetic biology, education, scientific competition and more so a bridge to communicate with the general public and researchers.