The moose project that culminated in this paper published in Nature Microbiology was so fun to be a part of. I have found myself in the most beautiful places, working with experts in fields I didn’t know existed, and part of a team that is the definition of interdisciplinary.

The project began before I officially joined Dr. Kelly Wrighton’s lab during my rotation project. Dr. Barbara Wolfe, a veterinarian at the Columbus Zoo and faculty member at Ohio State University, approached Kelly about a moose calf that was dying from gastrointestinal stress with diarrhea, weight loss and decreased appetite. Dr. Wolfe hypothesized that the illness was due to an incompatibility between the moose diet and the rumen microbiome, and wanted to know if we could use our tools to help. We collected many food, fecal and rumen fluid samples and performed 16S rRNA sequencing to identify which microbes were where and HPLC to profile chemical changes induced by the microbes. Guided by Dr. Wolfe and the veterinarians at the Columbus Zoo we performed a transfaunation, which in case you didn’t know - we had to google it when they asked us to participate- is when you take the rumen fluid from one animal and put it inside the rumen of another animal. The idea is that the bacteria in the rumen fluid will colonize the rumen of the sick animal to reinstate a functioning microbiome - similar to a fecal microbiota transplant. Looking back on my PhD, I realize this experience was pivotal in shaping my early career - as I realized the capacity of the microbiome to impact all aspects of health from obtaining energy from dietary inputs to mitigating disease.

About one month later, I had officially joined the lab and we started to build upon Dr. Wolfe’s hypotheses for my thesis project. Upon doing some initial research it turns out that across the country moose are susceptible to gastrointestinal problems. Both wild and zoo moose in Minnesota were dying from unknown causes, with symptoms of gastrointestinal stress. In fact, according to the Minnesota Department of Natural Resources, the Minnesota moose population decreased 50% from 2005-2013. At this time, linkages between diet and gastrointestinal distress in moose were not common, however I found one team in Alaska that had associated declines in wild moose populations to changes in vegetation that the moose were eating. Based on chemical analyses of the moose diet, these researchers speculated that condensed tannins, a type of plant polyphenolic, may be detrimental to moose fitness and fecundity. Dr. Spalinger and Dr. Collins, researchers who performed these studies in Palmer, Alaska, used fistulated moose to show that condensed tannin concentrations can limit the amount of Nitrogen uptake in the rumen and decrease overall health and reproductive success, which fit with Dr. Wolfe’s hypothesis that diet incompatibility may be causing gastrointestinal problems.

To truly tackle this problem for my thesis, we needed to understand the variation in a healthy moose microbiome, and how it changes with naturally occurring seasonal changes in the diet. In order to take multiple samples over time, we wanted to use fistulated animals because it would allow us to directly sample the rumen fluid without sedating the moose and inserting an orogastric tube down the esophagus. Believe it or not, fistulated moose are actually really rare, and definitely not in Ohio. Most fistulated ruminants are domesticated cows that eat grasses and hay, which is a very different diet than moose that often feed upon more woody plants, and likely have different compositions of microbial communities. It seemed that the only way to access naturally foraging, rumen fistulated moose was to collaborate with other moose researchers.

Looking back, I still can’t believe our luck, but Palmer, Alaska - the same place that the fistulated moose study occurred - just happened to be the location of the 48th Annual North American Moose Conference, which was scheduled for April 2014, just over 1 month after this project began at the Columbus Zoo. Animal scientists that focused on moose in Minnesota, Alaska, and Europe would all be there, including Dr. Collins and Dr. Spalinger. We could not pass up the opportunity, so we booked our tickets, and set off to Alaska.

The conference itself was a whirlwind. After almost 24 hours of traveling and finally crashing in our hotel at 3 am, we walked into the conference room in our best conference attire and friendliest faces. From a quick glance around the room, we thought we were in the wrong place. It seemed that the attendees were predominantly men, wearing jeans and a tan button up, and were associated with the Fish and Wildlife Department. I felt like the whole room was looking at us clear outsiders in our suits. Apparently they were, as most of our conversations started with “So where are you two from?”, followed quickly by a “so you are two microbiologists, studying moose in Ohio…you know moose don’t live in Ohio, right?”

The day of the field trip (yes this conference had field trips, which were really fun in a suit), we traveled up to the Matanuska Research Center where the fistulated moose are kept and met the moose and Dr. Bill Collins and his team of scientists who manage them. They were incredibly receptive to our interest in the rumen microbiome, as they also suspected it played an underappreciated role in moose health.  With little funding for any of our research, they volunteered to help us set up the experiment. Based on our combined interests, we decided to follow the moose rumen microbiome as the moose consumed primarily leaves of forbs, trees, shrubs, and grasses in spring and summer, to more woody, high lignocellulosic twigs of trees and shrubs in fall and winter.

By the end of the conference, we had set up an experiment, had one-of-a kind model system (fistulated wild moose!), and met many new collaborators/friends. All of the samples in my thesis were outlined during that week, many of them over scientific discussions with plenty of beer.  Beyond planning my entire PhD, I also learned the value of throwing myself into new settings, forging collaborations across disciplinary boundaries, and that in the end despite how different we may appear, we were all scientists curious to explore new research angles.

In this study, we realized we would need a better handle on how the plant material was digested into chemical energy, to feed the microbes. To study the chemistry of the rumen, we continued to grow our collaboration network by teaming up with specialists in carbohydrate chemistry and the enzymes that are responsible for degrading carbon. This included scientists from all over the world, from our initial collaborations at the University of Alaska, to Pacific Northwest National Laboratory in Washington, Norwegian University of Life Sciences, University of Copenhagen and Newcastle University in the UK, as well as also scientists from many different disciplines including viromics, carbohydrate chemistry, and carbohydrate active enzymes. Two key collaborators that mentored me and helped shape many of the ideas outlined in our publication, are Dr. Adrian Naas and Dr. Phillip Pope at the Norwegian University of Life Sciences.

The research in this paper and our previous publication united scientists from a wide range of locations and disciplines. I am now convinced that regardless of animal model, from moose to human, such a multi-disciplinary team is essential to understand the capacity of the microbiome to buffer changes in diet. As you can see from the length of my author list, and all the PIs on that list, this project relies on the integration of expertise from chemistry, veterinary science, wildlife biology, and microbiology. While no longer exclusive to the moose, the Wrighton laboratory through funding from NSF, is trying to understanding microbial interactions with condensed tannins, those potentially troublesome plant polyphenolics we first encountered in the moose project. Today, after completing my PhD, I am now a post-doc scientist at Nationwide Childrens’ Hospital working in a more common gastrointestinal system - the human gut. One of my new projects focuses on how diet during pregnancy impacts the gut microbiome and infant health. While it may seem far removed from the moose, many of the microorganisms and their processes in the rumen are shared in the human gut. I'll always be thankful to the moose project and my amazing team of mentors for teaching me the importance and power of building cross disciplinary teams. 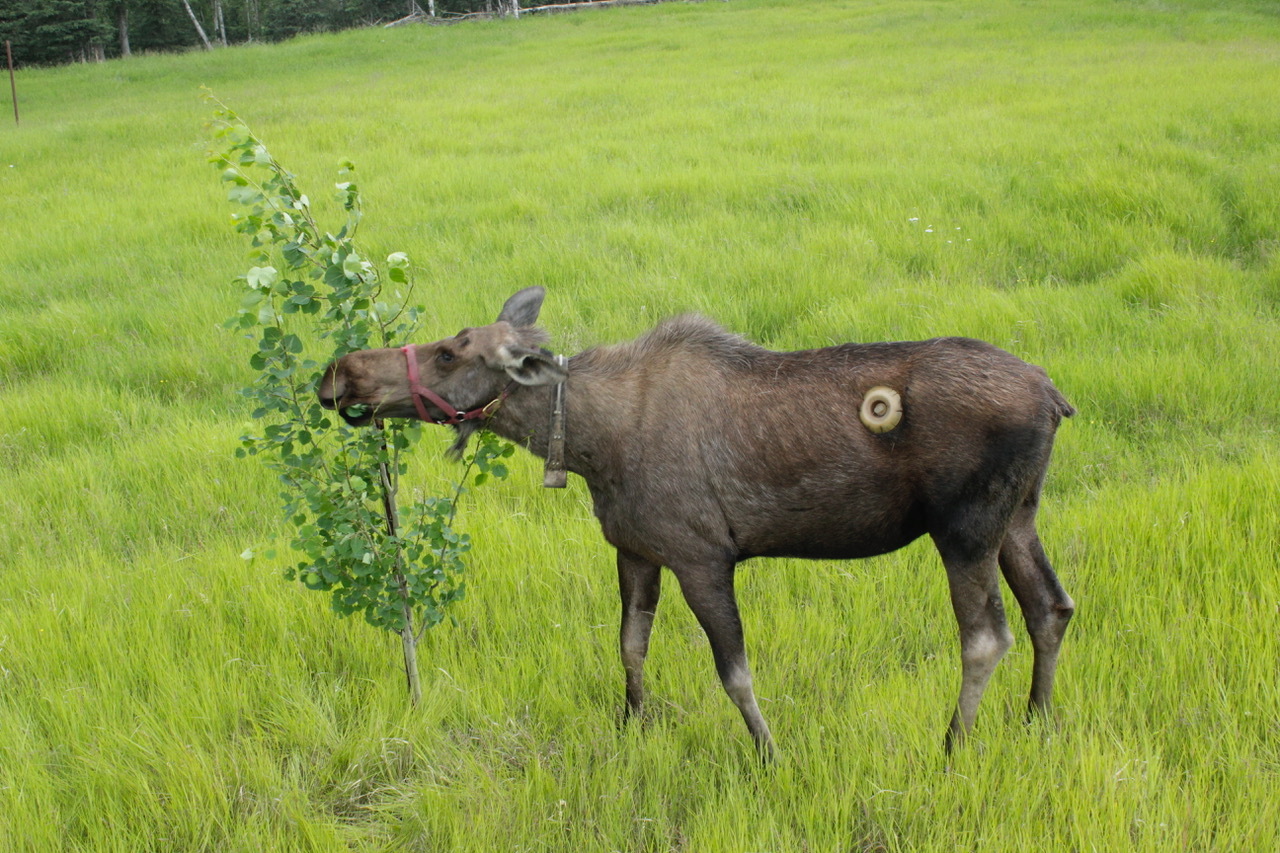