The paper in Nature is here: go.nature.com/2QqsWjl

Relative to proteins embedded in cytoplasmic membranes or bacterial inner membranes that are capable of many sophisticated functions, the outer membrane proteins of Gram-negative bacteria are generally considered “dumb”: they usually form simple barrels composed of a variable number of beta-strands that allow passive diffusion of small molecules, usually not very specific.  But the outer membrane usher protein FimD may be an exception, having some intriguing tricks up its sleeve.

FimD is expressed in uropathogenicE. coli, which causes urinary tract infections that affect half of the female population around the world at some time in their lives. The FimD usher has a co-conspirator called FimC “chaperone” that resides in the periplasm, the narrow space between the outer and inner membranes. The FimD–FimC usher–chaperone duet assembles the Type 1 pilus, a proteinaceous surface fibril with an adhesive tip that mediates bacterial attachment, colonization, and infection in the host urinary tract.

FimD forms one of the largest pores across a lipid membrane—a pore formed by an astonishing 24 beta-strands—in order to allow the passage and secretion of fully folded pilus subunit proteins. The pore is blocked by a “plug” domain when not in use. FimD is called usher because of its ability to sequentially recruit pilus tip subunits: first the adhesin FimH, followed by FimG, FimF, and finally thousands of the major pilus subunit, FimA. This ability is attributed to the amino terminal domain (NTD) of FimD, which is located on the periplasmic side. However, it has been well established that the pilus subunits are polymerized and then secreted through the usher pore when they are bound to the two carboxyl terminal domains (CTD1 and CTD2), also located in the periplasm. Therefore, it has been a mystery how the subunits recruited to the NTD are transferred to the CTD1/2 for secretion.

Figure 1. Two conformations of the FimD-tip complex comprised of FimD-FimC-FimF-FimG-FimH, captured by cryo-EM analysis.  In both conformations, the three tip subunits FimH-FimG-FimF have polymerized and are being secreted through the chamber of FimD usher. In the left structure, the NTD of FimD has disengaged from FimC-FimF, so the tip is only held in place by FimC, which is in turn held in place by the FimD CTD1/2. In the right structure, the NTD of FimD is in the midst of handing over FimC-bound FimF to the FimD CTD1/2, thereby capturing the elusive handover process. Importantly, the FimC-bound tip is secured by both FimD NTD and FimD CTD1/2. Therefore, the right structure may also suggest how the growing pilus end is stabilized from drifting away into the extracellular milieu.

In the paper published in Nature, we report a cryo-EM study that captured the Type 1 pilus tip assembly in two different conformations. The tip complex is composed of FimD–FimC–FimF–FimG–FimH. One conformation (the left structure in the figure) is similar to the crystal structure of the same complex previously reported by Dr. Gabriel Waksman’s lab in University College London, in which FimF, FimG, and FimH have polymerized into a tip fiber and bound to the usher CTD1/2. The other conformation (the right structure in the figure) is novel and captures the FimD usher in the midst of handing over the FimC–FimF chaperone–subunit complex from the NTD to the CTDs. The second conformation also provides a mechanism for stabilizing the growing pilus from diffusing away into the extracellular milieu.

In the new conformation, the FimD NTD, having recruited and now in complex with the FimC–FimF chaperone–subunit, swings toward and interacts with the CTD1/2. Therefore, the handover process involves a meeting between the N-terminus and the C-terminus of the usher. This mechanism is not unlike an Ouroboros—a serpent eating its own tail. Therefore, the outer membrane FimD usher not only is not dumb, it is a cunning beast. 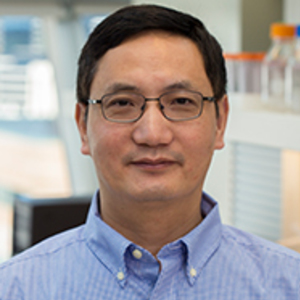