A community from Nature Microbiology
Contributor
Behind the paper, Microbiographies

Diana Nemergut was a mentor, friend, and contagiously fun scientist who catalyzed a new community of mentors, friends, and fun scientists to fill the gap.

As the truck and trailer slid off the snowy mountain roads for the seventh time in two months, I cursed under my breath. The previous six times I slid off the road, I got out and back on the road. This time, I was completely demoralized.

I’ve always wanted to be a field ecologist, but the synergistic beauty of math and biology lured me to become a mathematical biologist. My post-doc advisor, Diana Nemergut, encouraged my dream to pursue field ecology. As I prepared logistics for the field season, Diana was battling cancer, undergoing chemotherapy while pulling bureaucratic levers to secure her start-up funds for her post-docs, like me, to pursue their dream experiments should she lose the battle. On December 31, 2015, 4 months after I started my post-doc, Diana passed away. That lonely night in early January when the truck slid off the road for the seventh time was the first time I crashed after hearing of Diana’s passing.

I turned off the tilted car, hung my head and sighed. I grabbed a jar of whiskey and walked with my dog for miles along that snowy, wooded road in the Gila National Forest. Elk and Mexican gray wolf tracks painted a tale of predators and prey in the ephemeral medium of snow, teasing me with the question I wanted to answer by sequencing bacterial and plant genes in elk scat: could I detect changes in elk diet due to fear of wolves in the DNA of elk scat?

I returned to the tilted trailer in a ditch and spent three days living there, hiking with my dog, drinking my whiskey, and doing math. By day three, I conceived a method – phylofactorization - for partitioning microbiome datasets into lineages of microbes having different associations with meta-data (e.g. wolf presence/absence). I wanted to celebrate this method with Diana – she would’ve loved to hear the whole story of how it came to be. In her absence, I got the tilted truck & trailer out of the ditch, returned home and reached out to the scientific community.

I cold-called Juan Jo Egozcue and Vera Pawlowsky-Glahn in Spain to discuss how their mathematical tools were used in my analysis. They answered the call, invited me to Spain to give a talk, and said Lawrence David’s student was working on similar methods.

I wrote Lawrence and his student Justin Silverman a delicate email saying we may have arrived at a similar method, but it might be most productive if we join forces. Lawrence and Justin responded enthusiastically, and we developed a collaboration which brought both methods – PhILR and phylofactorization – to new heights.

I wrote Noah Fierer, Diana’s good friend, to see if he had microbiome datasets for testing the method; he connected me with his PhD students Jonathan Leff, who helped with the R package development and dataset acquisition, and Angela Oliverio, who simultaneously understands the mathematical methods while connecting, and even improving, them with exciting new microbiome datasets.

I wrote Rob Knight, another friend of Diana’s, and he mentioned that Jamie Morton was working on a similar method. Rob invited me to San Diego where a motley crew of us discussed phylogenetic methods for analyzing microbiome data. We organized the field into classes of methods – distances, variables, various phylogenetic inferences and imputations – and wrote this paper on methods for phylogenetic analysis of microbiome data.

Science, at its best, provides a scaffold for understanding this hot mess of life. Our paper discusses how the evolutionary tree is a scaffold for understanding the hot mess of microbial life. Science, at its best, is a collective effort prioritizing communal understanding over personal ambition. Our paper was made possible by just such a community: swamped professors answering emails from a lone post-doc in the woods and generously sharing their network to further our understanding of microbiomes. Science, at its best, is an adventure whose triumphs are best shared in the company of friends. Our paper is written in loving memory of Diana Nemergut, our mentor and friend. Her contagious love of science brought this community closer and her “phoenix grant” for her post-docs assisted the assembly of a new community to fill the gap in the academic canopy created when she passed away.

Diana in the Greater Yellowstone Ecosystem 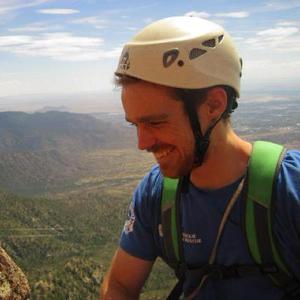 I'm an ecologist and mathematician son of a microbiologist mother with additional interests in mathematical finance and cultural anthropology. One person's interdisciplinary archipelago is another person's island of expertise - I'm interested in everything that evolves, from microbes and mammals to memes and markets. Understanding evolving systems is necessary to manage everything from microbiomes to financial markets.
Follow

Andrew Jermy
over 3 years ago