Many of us will have learned that bacteria and fungi are surrounded by a cell wall. The very term “wall” implies something hard, strong, impenetrable and made of bricks or stone stuck firmly and immutably in rows. The language that we have, as scientists, chosen to define this subcellular structure has affected how we think about it. Our team has been studying the bacterial cell wall using high resolution microscopy and have come to think about it differently.

The bacterial cell wall has several proposed functions and there are varying degrees of evidence to explain how these are fulfilled. Cell wall fragments are recognised by our immune system. The cell wall is also a “scaffold” to which other elements are attached. Cell wall functions of particular interest to the biophysicists in our team are those of resisting force (principally turgor - the pressure acting on bacteria and blowing them up like balloons) and maintaining cell shape.

Cell walls (plant, fungal or bacterial) contain similar polysaccharides (many sugar molecules linked together in a chain). In bacteria, these chains are further stuck fast to each other by covalently bonded peptides resulting in a massive single macromolecule which surrounds the bacterial cell: peptidoglycan. If we wash away everything else (DNA, proteins, membranes, etc.), the peptidoglycan retains the shape of the bacterium, a bit like a deflated beach toy. Peptidoglycan assembly is the target of many of our best antibiotics - penicillins block cross-linking of sugar chains by binding to enzyme catalysts, resulting in the death of bacteria. 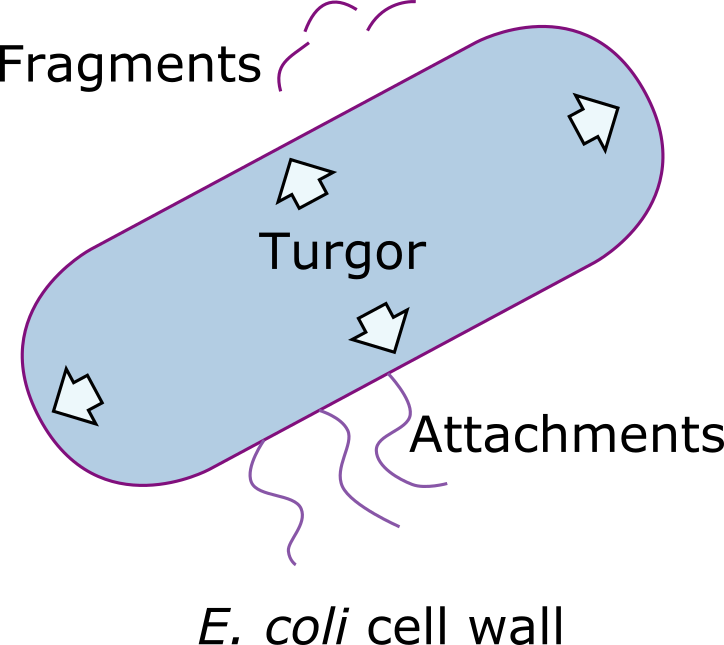 In our recent study published in Nature Communications, we used Atomic Force Microscopy (AFM) to visualise pure peptidoglycan taken from Escherichia coli (E. coli) bacteria. Recent advances in AFM technology, allowing increased force sensitivity through the use of smaller probes, let us visualise the material in sufficient detail to resolve individual chains of sugars in the wall. Seeing these after about a decade of looking at peptidoglycan with various AFMs was a pretty good day on the microscope! We found that the chains were oriented in roughly the same direction around the circumference of the rod-shaped cells, and that this orientation was maintained at the cell poles (which are roughly hemispherical). We also saw that the “wall” does not have a high degree of order such as is depicted in many textbooks.

We often hypothesise or assume that different shaped bacteria require different peptidoglycan polysaccharide chain organisation, and we finally had a tool to investigate this. We decided to artificially change the shape of a rod-shaped species, E. coli, into a spheroid by inhibiting processes in the cell with a drug-like chemical. Our AFM images of pure peptidoglycan from such cells revealed that they had lost their orientational order - the polysaccharide chains were essentially oriented at random. This was an exciting result as it forged a new connection between the nanometre scale organisation of the peptidoglycan polymer and the (much larger) micrometre scale of cell shape. It seems likely that circumferentially oriented chains are required for rod shape, and we can now being to explore this.

A long term goal of our research is to experimentally determine how the structural organisation of peptidoglycan results in its mechanical properties (how stretchy it is, or how much force is needed to break it) and thus the mechanical properties of the cell. This should enable a better understanding of how the material performs its functions of resisting force and maintaining cell shape. We also now have an assay for changes to peptidoglycan structure on a polysaccharide chain level, so we can ask how a particular mutation, chemical inhibitor or antibiotic alters this for the first time. This will provide new insights into structural changes caused by antibiotics like penicillin and how these might contribute to bacterial death. And while this research might not lead to new therapies in the short term, fundamental insights like these are vital for a long-term sustainable response to the problems of antimicrobial resistance.

Christopher Weidenmaier
about 4 years ago

Robert (Bob) Turner
about 4 years ago

Anticipating changes in biodiversity on an increasingly disturbed planet

Xiao Xiao
How do microbial communities assemble in the gut of Atlantic cod in response to diet and novel ingredients?
Contributor npj Biofilms & Microbiomes
Behind the paper

How do microbial communities assemble in the gut of Atlantic cod in response to diet and novel ingredients?