The paper in Nature Microbiology is here: http://go.nature.com/2Ikbt8S

One of the most invigorating feelings in science occurs when multiple layers of observation are unified to not only tell a compelling story, but also reveal hidden complexities that challenge our previous assumptions.  The story of the arms race between Emiliania huxleyi, the most globally cosmopolitan coccolithophore, and Coccolithovirus (EhV) has developed through several enticing chapters revealing how the virus hijacks host lipid metabolism and how viral release involves a precisely timed programmed cell death pathway.  This interaction takes place in coastal and open ocean blooms in the North Atlantic Ocean, which can be seen from Earth observing satellites, and leads to their termination.

An intriguing chapter in this arms race story was started when PIs Kay Bidle, Ben Van Mooy, Assaf Vardi, Jack DiTullio and Marco Coolen wondered if EhV infection can lubricate the vertical fluxes of carbon by pumping it into the ocean interior. Their hypothesis was based on previously observations that EhV infection enhances the production of glue-like polysaccharides called TEP, which serve to entrap cells, debris, and surrounding particles in larger aggregates. Combined with ballasting provided by dense coccoliths (biominerals that surround E. huxleyi cells), these particle aggregates could readily sink out of the surface layers to depth and, in turn, perhaps counter the assumed impact of ocean microbe viral infection: recycling carbon in the surface ocean. Having developed novel, lipid-based biomarkers that allowed the diagnosis of active infection in natural phytoplankton communities for the first time, the stage was set for this collaborative team to interrogate the impacts of viruses on upper ocean carbon biogeochemistry.

The North Atlantic Viral Infection of Coccolithophores Expedition (NA-VICE) was undertaken in the summer of 2012 and used an unprecedented combination of tools, ranging from high resolution water column optical properties to gene- and lipid-based biomarkers of infection and sediment trap measurements, providing a comprehensive look into the dynamics of this arms race and its impacts on ecosystem dynamics and carbon flux. The first monumental task was to find E. huxleyi blooms within the expansive North Atlantic in a state that we could observe the infection process play out over a 4-5 day period (the amount of time it takes for infection to take hold).  Along the way, we discovered that not all turquoise blooms observed from space indicate thriving E. huxleyi populations. Guided by satellite observations, the first phytoplankton bloom we visited had little to show for an active E. huxleyi population. Rather, it had already been terminated with the turquoise reflectance serving to advertise the carnage. It was only with the remote sensing expertise of professor Anna Martins that we were able to find and study active E. huxleyi blooms and the various states of infection.

As samples and data were further processed in the years following the cruise, it was exciting to see how it coalesced to reveal virus facilitation of carbon export out of the surface ocean to depth.  Our lipid biomarkers acted as a critical backbone and scaffold for interpreting the interactive dynamics between host and virus, and as we layered on the associated TEP production, particle aggregation, sinking particle fluxes, and other in situ observations, the ecosystem and biogeochemical ramifications of EhV infection became evident. Very high fluxes of particulate organic and inorganic carbon were raining down from actively infected E. huxleyi blooms into the mesopelagic where it is respired at depth. Hence, EhVs appear to enhance the pumping and sequestration of carbon rather than retard it.

We were particularly surprised to find the preferential grazing of infected E. huxleyi cells by microzooplankton within these blooms.  Viral infection and grazing have traditionally been viewed as separate and competing pathways of carbon flow. This is the first time evidence for a collaborative coupling between these two ecosystem pathways has arisen, working together to facilitate carbon flux. Infection increases the lipid content of cells, so grazers may selectively feed on them for higher nutritional or caloric value than the other phytoplankton. The observed aggregation of particles during infection could also make small cells accessible to larger zooplankton such as copepods, whose fecal pellets have high sinking rates. This work reveals unexpected layers to how planktonic ecosystem interactions impact carbon cycling in ways we hadn’t envisioned and compel us to test these novel aspects in future expeditions. 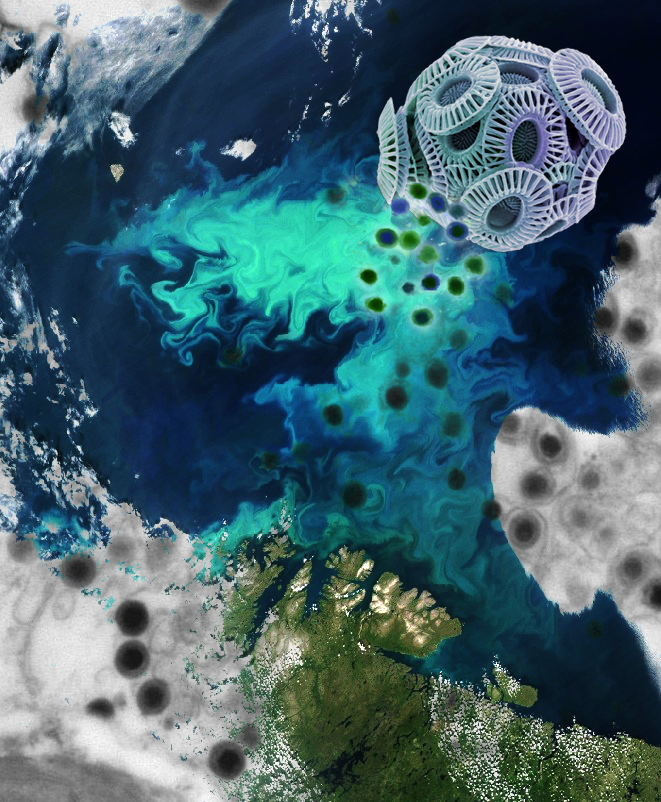