Bacteria use fungal highways to travel across cheese rinds

The paper in Nature Communications is here: http://go.nature.com/2n4ZOBS

We tend to convey the process of science as highly ordered and structured. Ask questions, collect data, analyze data, and make conclusions. But surprisingly often we stumble across fascinating biological phenomena when we are not really doing science. That is how we discovered 'fungal highways' in cheese rinds as described in our recent Nature Communications paper.

It was a late night in the lab towards the end of my post-doctoral position in Rachel Dutton’s lab at Harvard University (Rachel is now at UC San Diego). I had been working with Rachel to develop the microbial communities that live on the surfaces of cheeses (commonly called cheese rinds) as relatively simple and tractable model microbial communities. Normally we were hard at work in the lab processing genomic sequencing data or reconstructing microbial communities on in vitro cheese. But on this night, we were working on an art-science collaboration.

We were taking images of microbial communities isolated from cheese rinds as part of a collaboration with a cheese professional and a photographer. Our goal with this collaboration was to highlight the diversity of cheese rinds based on how their microbes appear when grown in the lab. We had plated out the microbes from a large range of cheeses onto Petri dishes and microbial colonies appeared. A sampling of some of these photos can be found below.

Most of the colony types that we observed were things we had seen in the past. Slimy blobs of Proteobacteria, fuzzy mounds of mold, and bright orange spots of Brevibacterium. But when we got to the Petri dishes from a cheese called Saint-Nectaire, we were in for a real treat. Saint-Nectaire is a natural rind cheese and is aged in caves where it is colonized by molds such as Mucor species and various bacteria (similar to photo on the left below). When we zoomed in with the microscope to take a closer look, we noticed strange streams of bacteria emerging from near fungal colonies.

This pattern of growth suggested to me that the bacteria could be growing along the fungal hyphae. Hyphae are the filaments that make up the mycelia of filamentous fungi. I suspected that bacteria could ‘hop on’ these fungal networks and then more easily disperse across cheese surfaces. I was immediately reminded of work in soils systems proposing that motile bacteria could grow and spread on fungal hyphae, a phenomenon termed ‘fungal highways.’ When we zoomed in on this interaction with a microscope, it did indeed look like a highway!

Most prior work on fungal highways combined strains of bacteria and fungi in the lab that may have never encountered each other in nature. How often fungal highways occurred in nature and their ecological significance was largely unknown. Our cheese rind system had the power to put these interactions in a broader ecological context. We started with the observation of bacteria dispersing on fungi from a defined community (the Saint-Nectaire cheese). Because we can easily culture most bacteria and fungi from cheese rinds and could recreate cheese rind communities in the lab, we could test the significance of these pairwise interactions for the development of whole communities.

When I started my own research lab at Tufts University in 2014, we began exploring the role of fungal networks in the development of cheese rind communities. What types of cheese bacteria used fungal highways for dispersal? What mechanisms did the bacteria use to disperse on these fungi? Did different species of cheese fungi make slower or faster highways for the bacteria? Could the presence of fungal highways in cheese rind communities shift the composition of the cheese microbiome to favor those bacteria best suited to using the highways? An enterprising undergraduate Kaite Zhang (lead author of the paper) helped me tackle these questions. We also received help with microscopy and imaging from Jeff Guasto (Department of Mechanical Engineering, Tufts University).

In our Nature Communications paper, we present a suite of data that answer most of these questions. We found that many cheese rind bacteria can use fungal networks to disperse across surfaces. Motile Gammaproteobacteria were those that were best at using these networks. By focusing on one cheese bacterium, Serratia proteamaculans, we demonstrated that production of functional flagella is necessary for dispersal on fungal networks. This supports previous studies that found that active motility is necessary for motile bacteria to dispersal on fungal hyphae. The most exciting finding from our work is that fungal networks can shape the composition of cheese microbiomes. When fungal networks (and synthetic networks that mimic fungi) are added to experimental cheese communities, bacteria that can use the networks for dispersal are favored over those that cannot.

The work we present in our manuscript is basic science. But there are important implications of this work for the safety and quality of cheese. Some very dangerous pathogenic bacteria, such as Listeria monocytogenes, are motile and may use fungal networks to quickly colonize cheeses. Cheese makers may be able to manipulate the fungi present, through the use of starter cultures, to favor some bacteria over others. This cheese rind engineering may help better control the safety and quality of naturally aged cheeses.

I think the 'origin story' of this project also provides an important lesson about the serendipity of science and the value of culturing microbial communities. As microbiologists become inundated with high-throughput sequencing data describing the diversity of microbiomes, many of us are spending a lot more time staring at computer screens and less time looking at microbial cultures. Our discovery demonstrates that careful observation of a simple mixed culture can reveal fascinating microbial interactions happening on familiar foods. 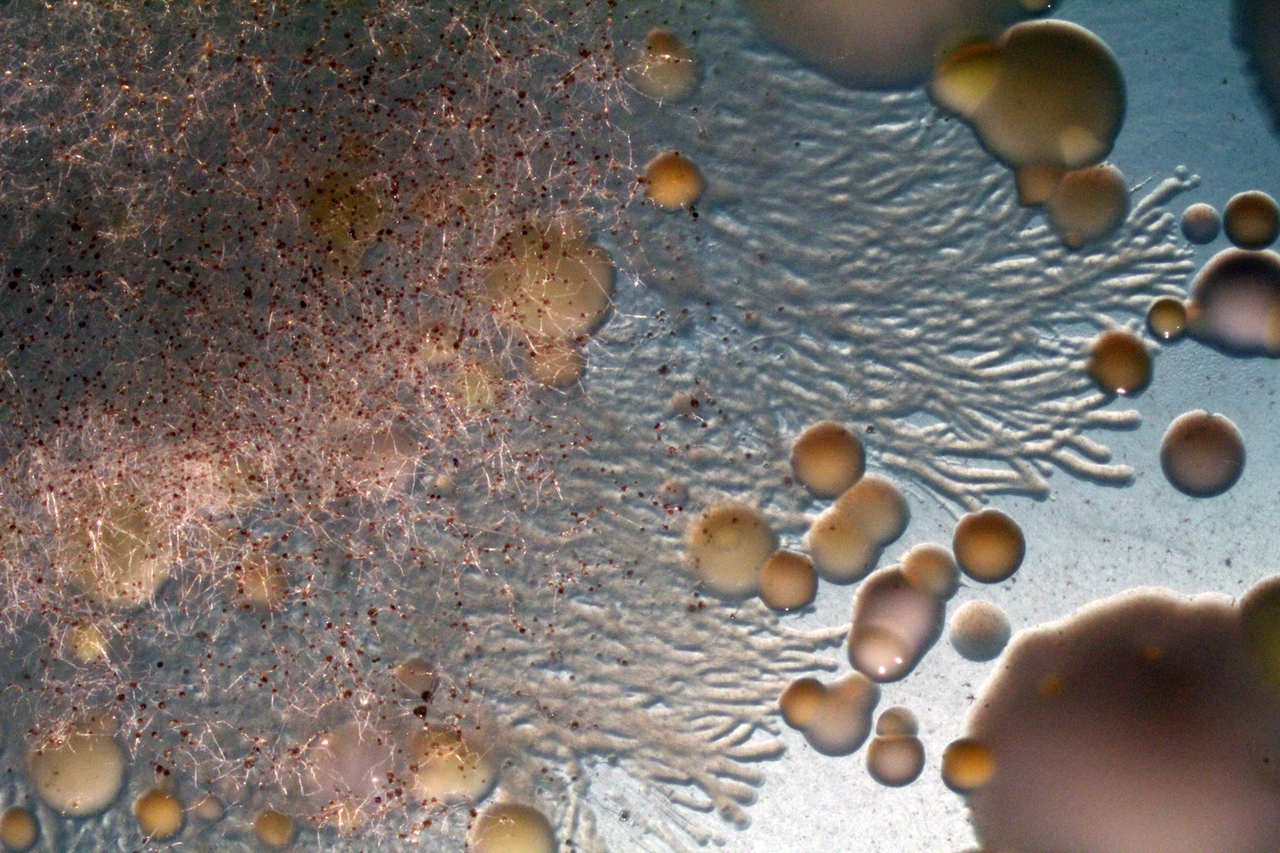 Bacteria use fungal highways to travel across cheese rinds