A 3D model of the human bronchiole and its response to invasive infection as well as its volatile-mediated communication with nearby microbial populations
Layla Barkal
Medical and Graduate Student, University of Wisconsin-Madison
Follow
Liked by Cesar Sanchez and 2 others

The paper in Nature Communications is here: http://go.nature.com/2joBiJo

We inhale hundreds of microbes every day that, when inhaled, enter the incredibly complex environment of the human lung and join other microbes, mucus, and all sorts of host defenses. Despite this daily microbial onslaught to our lungs, we are just fine. Usually. As a physician-scientist trainee, I cared for patients struggling to fight a variety of pulmonary infections - from the otherwise healthy patient suffering from mild pneumonia to elderly patients in the ICU requiring ventilators to help them breathe. We know frustratingly little about how and why pulmonary infections occur and during my work in the Microtechnology, Medicine and Biology lab (MMB lab) at the University of Wisconsin - Madison, I knew I wanted to bring an engineering approach to study the mechanisms and pathogenesis of pulmonary infections. Little did I realize how long it would take and what a big team we would need to make it happen.

As so many projects begin, we sat down to flesh out the main goals and from there we listed the design requirements for our platform. We knew we wanted to build a model of pulmonary infection that could accommodate a variety of pathogens, could mimic the host immune response, and could provide multiple orthogonal readouts; we particularly wanted to maximize the flexibility of the system to be able to answer a wide variety of questions. We also wanted the system to be as relevant to human biology as possible, so that any findings could be translated into treatments for these infections in patients.

We decided to tackle the host side of the equation first (the human lung) and we started by looking at the current state of the art method to model pulmonary infections: the air-liquid interface (ALI) transwell. This model is comprised of a monolayer of primary human epithelial cells atop a porous membrane with air on the apical side and media beneath. The epithelium can also be differentiated to form cilia and produce mucus on the apical side. The power of the ALI model stems from its use of primary human airway epithelial cells. Unfortunately, these cells are an exceedingly limited resource. This is where our first collaborators, the Denlinger and Gern labs, come in; both labs have protocols and expertise in obtaining these precious cells, but traditional ALI experiments require many millions of cells and are supply-limited, even in the hands of labs with such experience.

This cell number issue was a problem we could solve; the MMB lab wheelhouse is building microscale models with dimensions and geometry more similar to in vivo tissue and with much lower cell requirements. So, we would use primary human epithelial cells in a microscale lung model. But we were still stuck on how to incorporate more of the cellular components of the lung, especially a representation of the immune system, into our design. Around this time, Tony Jimenez-Torres, another grad student in MMB lab, had developed significant expertise creating luminal structures in biomimetic collagen matrices. I was well aware of Tony’s efforts - the numerous designs scattered over our adjoining desks were a daily reminder. The triple lumen concept, a central air-exposed bronchiole lumen with flanking vascular lumens containing immune cells, was designed with Tony in about 15 minutes. The execution was not so simple. Yasmin, Clare, and I then spent years troubleshooting and optimizing. We tested different geometric permutations, a variety of extracellular matrices, different cell growth and seeding protocols, and so many more parameters.

When we finally settled on the current version of the organotypic bronchiole model, it was time to turn our attention to which pathogen we would use to pilot our new tool. We settled on introducing the fungus Aspergillus fumigatus for our initial studies due to our close collaboration with the Keller lab and the extremely high morbidity and mortality associated with Aspergillus fumigatus infection. After a bit (a lot) of troubleshooting, we observed that our lung model responded to the invasion of fungal hyphae. Although this was a major win in our eyes, this direct contact between pathogen and the lung is just one mode of interaction – we also wanted to be able to look at indirect effects that a pathogen might have on its host. We had seen reports of Aspergillus and Pseudomonas, fungi and bacteria, respectively, both well-known for producing copious secreted metabolites, communicating with each other via volatile compounds in shared air. However, no one had investigated the possible impact of these volatile compounds on the host lung during co-infection with these pathogens. To begin to get at this, we designed the coculture insert: a milled plastic piece with two culture wells that sits in the same dish as the lung model and lets us grow microbes that share airspace with the bronchiole in the lung model without actually touching the human cells. Using the coculture insert, we demonstrated, for the first time, that the lung can indeed sense microbial volatiles.

We are excited by the potential for our organotypic bronchiole model to open new avenues for pulmonary infection research. We also hope that this project encourages other researchers to pursue interdisciplinary collaborations; as bioengineers, we had an excellent time working with and learning from our microbiology and clinician colleagues and, perhaps unsurprisingly, we found that to effectively study these multi-cellular, multi-kingdom interactions we most definitely needed a multi-lab approach. 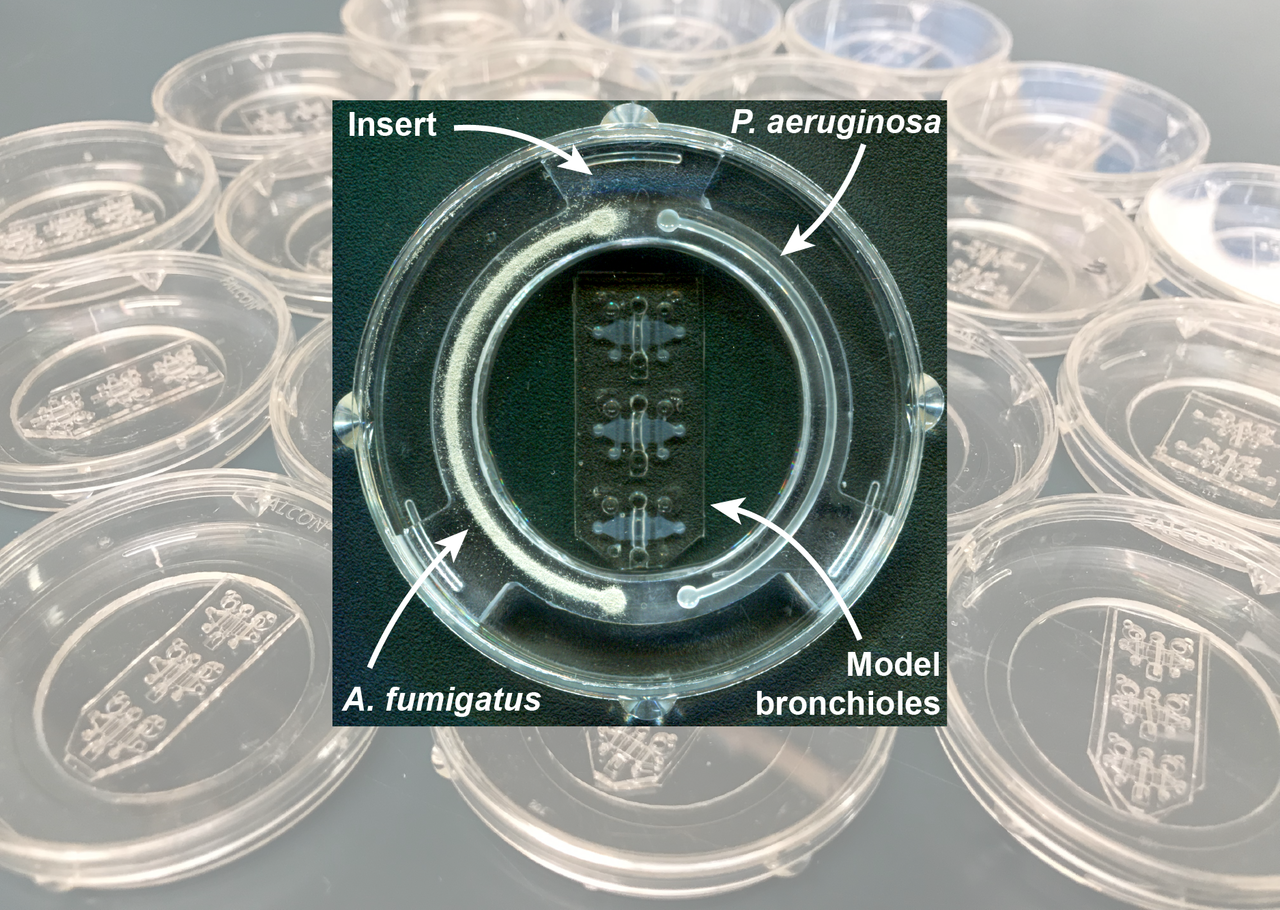