The paper in Nature Communications is here: http://go.nature.com/2yGcaI0

Streptococcus pneumoniae (the pneumococcus) is one of the most important causes of infectious disease in man. A crucial aspect of the biology of the pneumococcus is its ability to switch on a physiological state called competence. In this state, also called the X-state (for ComX), cells produce and secrete several antimicrobial peptides allowing them to lyse non-competent neighboring cells. Furthermore, in the X-state, cells produce a machinery that allows them to take up extracellular DNA from the environment (hence the word sex in the title of this blog post to get your attention). Imported DNA from lysed cells might be used as food, as template for DNA repair or can be used to acquire new traits such as resistance to antibiotics or evasion of the human immune system. Seminal work by the labs of Alexander Tomasz, Sigve Havårstein, Jean-Pierre Claverys and Don Morrison has unraveled how the X-state is regulated and it was shown that a small 17 amino acid long peptide, termed CSP (for Competence Stimulating Peptide), is able to activate competence when added to the growth medium (for a historic account, see this Classic Spotlight paper by Peter Christie). CSP activates a two-component signal transduction cascade triggering the autophosphorylation of the membrane-localized histidine kinase ComD. Activated ComD then phosphorylates the response regulator ComE, which dimerizes and activates a set of genes including comX. ComX encodes the only alternative sigma factor in S. pneumoniae and switches on the genes required for DNA uptake. It turns out that CSP is the processed form of ComC, a small peptide encoded in the same operon as comE and comD, which is under autoregulation by ComE. Thus, for many decades competence has been regarded as a classical example of Quorum Sensing (QS) in which cells accumulate CSP in the growth medium, and once a critical concentration of CSP has been reached, all cells synchronously activate the X-state.

More recently, several groups, including ours, have shown that competence is triggered by several environmental cues including pH, oxygen levels and the presence of several types of antibiotics (e.g. Prudhomme et al., 2002 Science: Slager et al., 2014 Cell). Thus, an important outstanding question in the field was how could a QS system utilizing an extracellular peptide integrate all these different types of stresses? To tackle this question, we wondered if we could build a mathematical model that would incorporate all the molecular details we know about competence activation, and then ask the model if these ingredients are enough to explain our experimental observations, or whether we need an updated molecular model for competence. We teamed up with Sander van Doorn and Franz Weissing of the Groningen Institute for Evolutionary Life Sciences and the whole project was driven by a fantastic student that joined our labs in 2013, Stefany Moreno-Gámez. While Stefany was trained as a theoretical biologist, she very rapidly learned microbiology and was able to both build the model and do many of the experiments.

Interestingly, the classical QS model was recently challenged by the lab of Patrice Polard in Toulouse. They suggested that competence is not coordinated through a common extracellular CSP pool, but rather that it stochastically starts in a subpopulation and spreads via cell-to-cell contact (Prudhomme et al., 2016 PLoS Genetics). To examine whether cell-cell contact is crucial for the spread of competence we turned to single cell analysis. By growing wild-type cells together with cells mutated for comC (which are thus not able to produce CSP themselves), we observed that comC mutants could still activate competence, but only when grown in the presence of wild type cells. Crucially, the time-lapse microscopy images show that cells do not need to be physically touching, providing direct evidence that CSP is secreted in the extracellular milieu and can then be sensed by neighboring cells (see movie below), in line with the classical work done in the 60’s by Alexander Thomasz (Thomasz, 1965 Nature). Nevertheless, in certain strains and under certain conditions we also find less synchronized activation of competence development, similar to the study of Marc Prudhomme and co-workers. Therefore, many outstanding questions now remain. For instance, how is competence initiated and spread in more realistic, human nasopharynx-like environments? How is CSP released by cells and why is this release more prominent in some strains than in others? What is the biological function of employing QS to regulate the X-state? How does competence contribute to the spread of antibiotic resistance and vaccine-escape? There are exciting times ahead and I think our study shows that an interdisciplinary approach, combining mathematical modeling, genetics and single cell analysis, can provide important new insights into ‘old’ processes.

This movie demonstrates that competence can spread without the necessity of cell-to-cell contact. The red cells in the top right corner are comC mutants (and thus do not produce CSP) while the cells in the bottom left are wild type and produce CSP. After 60 min, some cells in the comC mutant also start to express SsbB-GFP (a competence marker). Scale bar: 5µm. Note, this is Movie S2 in the original paper: Moreno-Gámez et al. Nature Communication: Quorum sensing integrates environmental cues, cell density and cell history to control bacterial competence. https://www.nature.com/article... 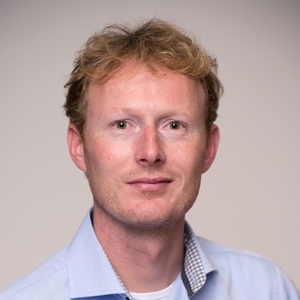