Bacteria have developed various mechanisms by which they sense, interact, and kill other bacteria, in an attempt to outcompete one another and survive. We show that Bacillus subtilis can kill and prey on its niche rival Bacillus megaterium utilizing nanotubes.
Sigal Ben-Yehuda
PI, HUJI
Follow
Like Liked by Cesar Sanchez and 4 others
0

The paper in Nature Communications is here: http://go.nature.com/2wzFlL6

Bacteria in nature reside in multispecies communities, with a structure that is primarily determined by complex interactions between niche members. Bacterial interactions can be either social, designed to promote a certain population, or antagonistic, devised to kill rivals competing for nutrients and territory. Bacterial cells are known to interact mainly via the secretion of molecules into the extracellular milieu. However, there is always a risk of losing the secreted molecules to some unintended intruder, or that the molecules will be simply diluted or degraded. To overcome these obstacles, bacteria developed contact-mediated devices, enabling the direct exchange of molecules between neighboring cells. Our lab has previously identified intercellular membranous structures, termed nanotubes, as a device for exchanging cytoplasmic molecules among neighbors in an intra- and inter-species manner.

To study shaping of multispecies communities, we utilized our favorite soil bacterium, Bacillus subtilis (Bs), as a core model organism, and investigated its interactions with naturally existing soil bacterial strains. We collected bacteria derived from the same soil niche, and identified the species using 16S rDNA. Among the isolated strains Bacillus megaterium (Bm) was of particular interest, as its growth was inhibited by our Bs lab strain in a contact-dependent manner. This was the original observation that triggered a detailed exploration of how Bs antagonizes its niche rival Bm.

Initially, we searched for potential toxin-antitoxin systems that might be involved in this process, and found that Bs inhibits Bm by delivering the toxin WapA. A Bs strain lacking wapA was unable to kill its rival Bm, whereas Bm harboring the anti-toxin wapI was immune against Bs.

To explore whether, on top of killing its opponent, Bs can prey on Bm by extracting its beneficial nutrients, we designed a fluorescence assay to monitor amino acid extraction. Utilizing a methionine analogue as a nutrient reporter, we were able to directly visualize nutrient extraction from Bm by Bs, an activity that was, again, purely contact-dependent.

A genetic screen aimed at identifying additional genes influencing the interaction between Bs and Bm revealed that both phenotypes, Bm killing and nutrient extraction, were impaired in a Bs strain lacking ymdB, previously shown by our lab to be required for nanotube formation. Indeed, electron microscopy (EM) analysis revealed a network of nanotubes connecting the two Bacilli. Furthermore, using immuno-EM, we could clearly detect WapA molecules that localized to intercellular nanotubes.

Our findings highlight that nanotubes can mediate not only symbiotic interactions, but also antagonistic activities, contributing to the battle among species.

The observation that Bs nanotubes were implicated in both toxin delivery to and nutrient extraction from Bm suggests that cargo delivery via nanotubes can be bidirectional.

Finally, we show that a bacterium can dominate a niche not only by eliminating its rival, but also by directly extracting valuable nutrients from its opponent's reservoir.

Thus, like people, Bs can be evil when fighting for territory and nutrients... 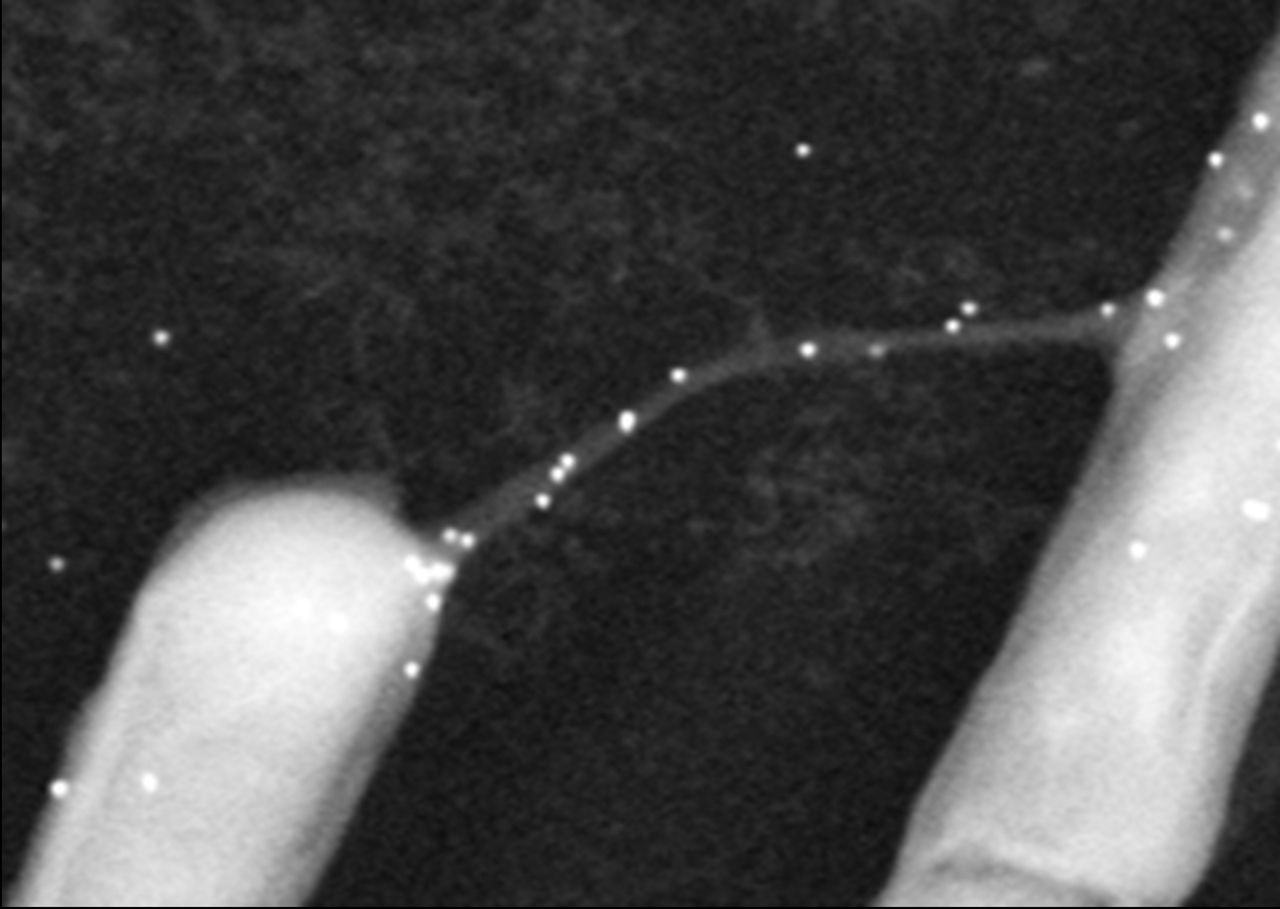 Bacteria have developed various mechanisms by which they sense, interact, and kill other bacteria, in an attempt to outcompete one another and survive. We show that Bacillus subtilis can kill and prey on its niche rival Bacillus megaterium utilizing nanotubes.