Our recent work published in Nature Communications shows that bacteria killing adjacent competitors via the Type VI secretion system leads warring strains to segregate into separate sub-communities. Counter-intuitively, the population structure created by this warfare creates the conditions that favour the evolution of within-strain cooperation. The story of the paper is itself a story of collaboration across a range of fields.

Bacteria seem to have an endless array of ingenious weapons that they use to kill each other; from the antibiotics we use to treat infections to narrow spectrum bacteriocins and pyocins. One of the most elegant bacterial weapons discovered to date is the Type VI secretion system (T6SS), a contractile nanomachine used to inject lethal effector proteins into adjacent competitor cells. Since its identification in 2004 the T6SS has been subject to intense research to understand its mechanism and structure. However, we know a lot less about the ecological and evolutionary consequences of bacterial warfare via the T6SS. This is what we sought to add to in this work and it ended up as an interdisciplinary collaboration including microbiologists, evolutionary biologists, mathematical modellers, and physicists.

The story of the paper started when evolutionary biologist Will Ratcliff and microbiologist Brian Hammer at Georgia Tech started chatting about the T6SS, which Brian’s lab had been studying in Vibrio cholerae. Will built a computer simulation to try to examine what happens when competing strains attack each other with their T6SSs while growing on surfaces. The patterns that appeared were striking, with complex labyrinths of patches of the different strains emerging and growing through time. Will showed the patterns to physicist Peter Yunker, who was immediately struck by the patterns, responding: “Aha! This is obviously phase separation via a ‘Model A’ order-disorder transition”. This initially resulted in some scratching of heads by all of us, but Peter explained that there are models from statistical mechanics (in particular the Ising model and the Allen-Cahn equation) used to model the behaviours of alloys and ferromagnetism that show just the same behaviour. At this point enter my former post-doc boss Sam Brown and I. We built a mathematical model under some different assumptions but get the same result. Everything appears to match up to have discovered something cool… well in theory at least! It was then time to see if real bugs do it too.

After some strain construction, competition experiments and confocal microscopy by Eryn Bernardy, Jacob Thomas, Arben Kalziqi and Jennifer Pentz from the Hammer, Ratcliff and Yunker labs we got the results – the exact same patterns emerge when strains of Vibrio cholerae compete via their T6SSs, with the warring strains segregating out into separate patches (see the images below of the emergent patterns). The patterns are so similar in fact that the data from all of our models and experiments collapse onto the same ‘universal curve’, meaning the patterns are essentially indistinguishable. The process of how strains segregate really is “phase separation via a ‘Model A’ order-disorder transition”. 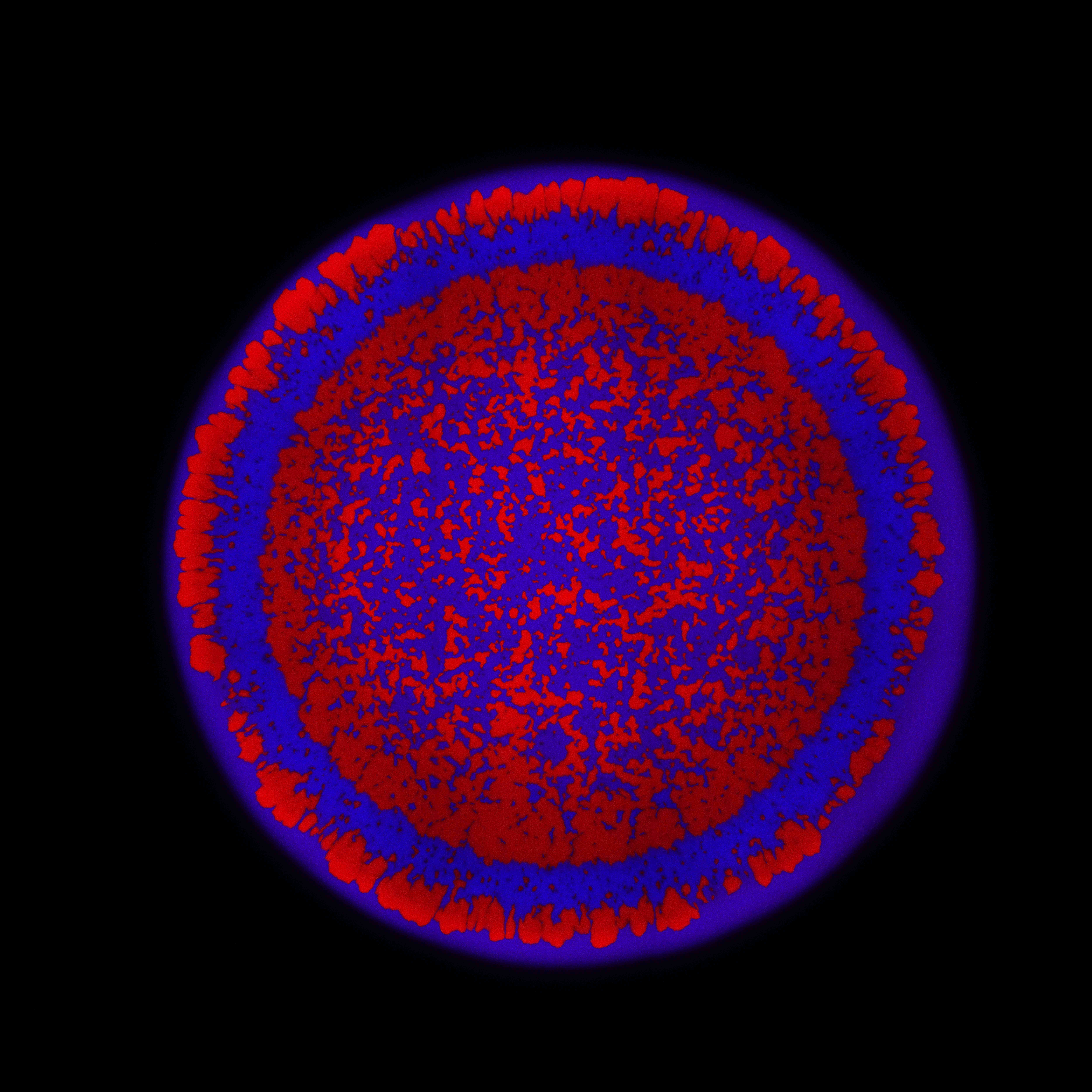 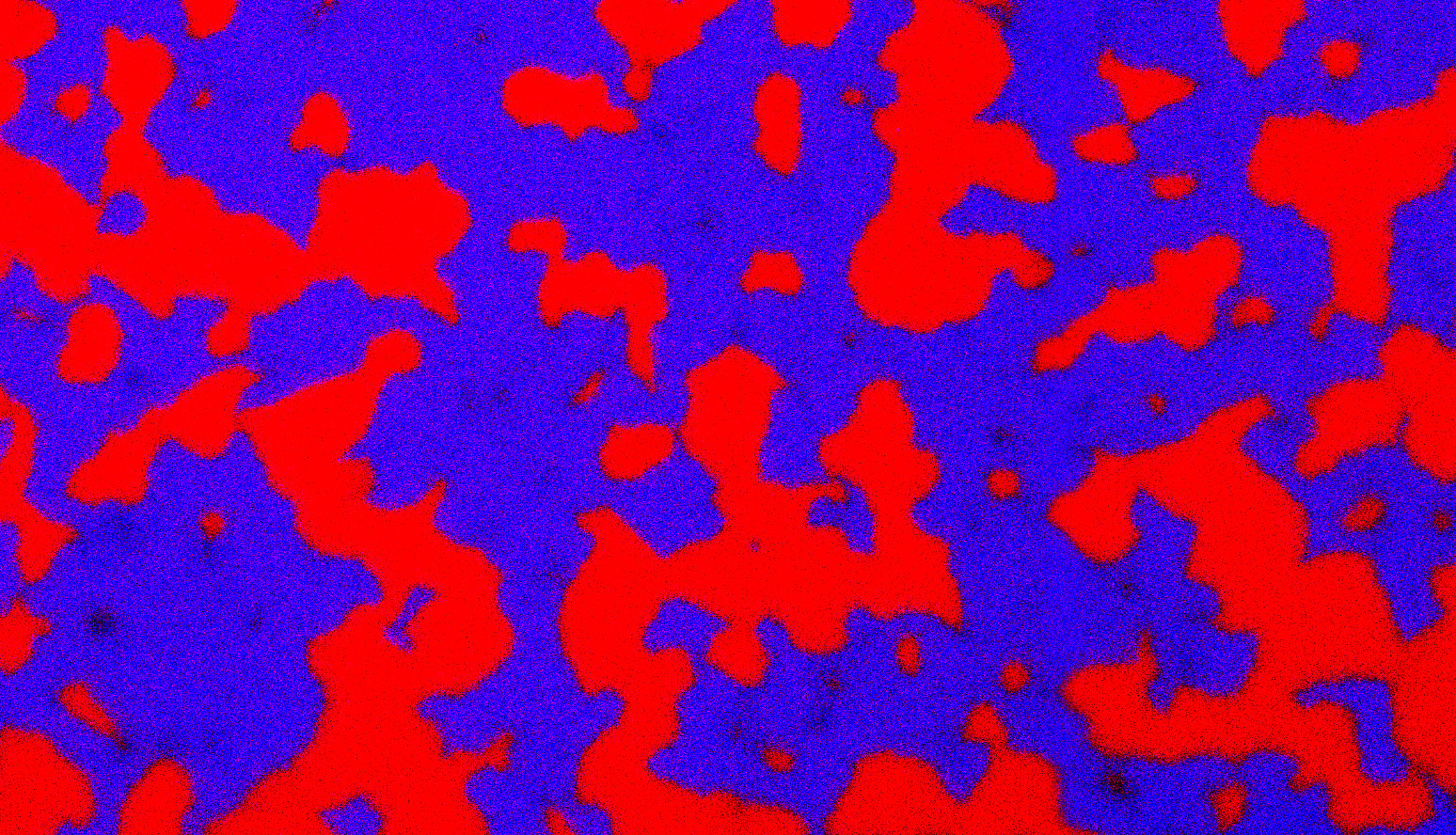 This got us thinking about what this emergent spatial structuring might mean for the further evolution of warring strains. One thing that this kind of spatial structure is really important for is the evolution of cooperation – if strains tend to end up segregated then if they invest in forms of cooperation like producing costly extracellular enzymes then the benefits of these will mostly go to other cells of the same strain rather than competitor strains that might not invest in cooperation. We modified our mathematical model so that one of the competing strains was a cooperator that invested in the production of a costly enzyme and found that the emergent spatial structure created by T6SS warfare allowed these cooperates to flourish. Again, all well and good in theory but is there any evidence for it in the real world? We tested this using phylogenetic comparative analysis and found that strains of Proteobacteria and Bacteroidetes that carry more T6SSs and T6SS effectors also carry more genes coding for putatively cooperative traits in their genomes. It looks like there’s a kind of bacterial ‘tribalism’ going on here – investing in weapons to kill competitors excludes them from the group, meaning that it pays more to invest in cooperation within the group.

This study really brought home to me the value of broad collaborations. We were able to go from understanding the detailed physics of how bacterial warfare structures their populations up to detecting the macro-evolutionary signatures of this process in genomes of diverse bacteria, which would have been impossible without such an inter-disciplinary team. It was really fun to learn so much from people from different fields: I now know what a ‘Model A’ order-disorder transition is, which is obviously going to be a great topic for cocktail party conversation. 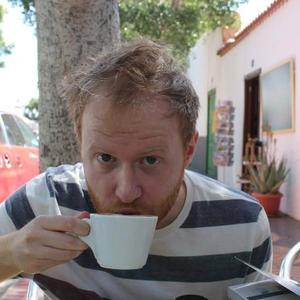