Energy metabolism within immune cells is key in determining their function. Here we show that each (part of a) microbe activates a different metabolic route within an innate immune cell.

As guards of our body, innate immune cells constantly patrol for uninvited guests and, when needed, eliminate them. Although patrolling could be considered a relative relaxing occupation, bumping into an invader and disarming it is quite stressful and energy-demanding. Activated immune cells rapidly burn metabolites in order to generate enough energy to attack. However, until approximately a decade ago no immunologist thought about measuring intracellular energy metabolism. In the last ten years however, the importance of intracellular metabolism has been widely acknowledge by immunologists. Nowadays, intracellular metabolism of immune cells is considered to be a crucial part in determining immune cell function.

We now know that resting, anti-inflammatory immune cells go for the most efficient way to generate energy and predominantly use oxygen in their mitochondria for ATP production, a process referred to as OXPHOS. This is in contrast to activated immune cells that require rapid energy production and go for a more “quick and dirty” way by burning glucose in the cytosol to form lactate and ATP, a process called glycolysis. Deciphering the metabolic routes contributing to immune cell activation may provide new targets to manipulate their inflammatory response. So far, many studies have predominantly been done with mouse immune cells using a bacterial component called lipopolysaccharide (LPS). We therefore aimed to identify whether human immune cells make use of a similar switch from OXPHOS to glycolysis upon microbial activation and to determine whether activation by different types of microbial stimuli has any effect on the metabolic routes used by immune cells.

To that end we stimulated human monocytes (a type of innate immune cell) with various microbes and the Toll-like receptor ligands LPS and Pam3CysSK4 (P3C)*. We confirmed that upon activation with either of the microbial stimuli immune cells increased glycolysis; the quickest way to generate energy. Intriguingly however, LPS was the only stimulus that lowered OXPHOS. All the other stimuli did not affect or even increased OXPHOS. We decided to zoom in on this difference in metabolic regulation upon activation by comparing monocytes stimulated with LPS, which lowered OXPHOS, with monocytes stimulated with P3C, that did not alter OXPHOS of monocytes. Since OXPHOS takes place in the mitochondria, it might not come as a surprise that mitochondrial enzymes were more active in P3C- versus LPS-stimulated monocytes. Also, intracellular levels of multiple metabolites part of different metabolic routes varied between P3C vs. LPS treated cells. Most importantly, the different metabolic routes used by the cells led to different functional consequences for the innate immune cells including cytokine production and phagocytosis. Hence, depending on the type of microbe they encounter monocytes use various metabolic routes that probably lead to the functional output that is required to effectively combat the invader. 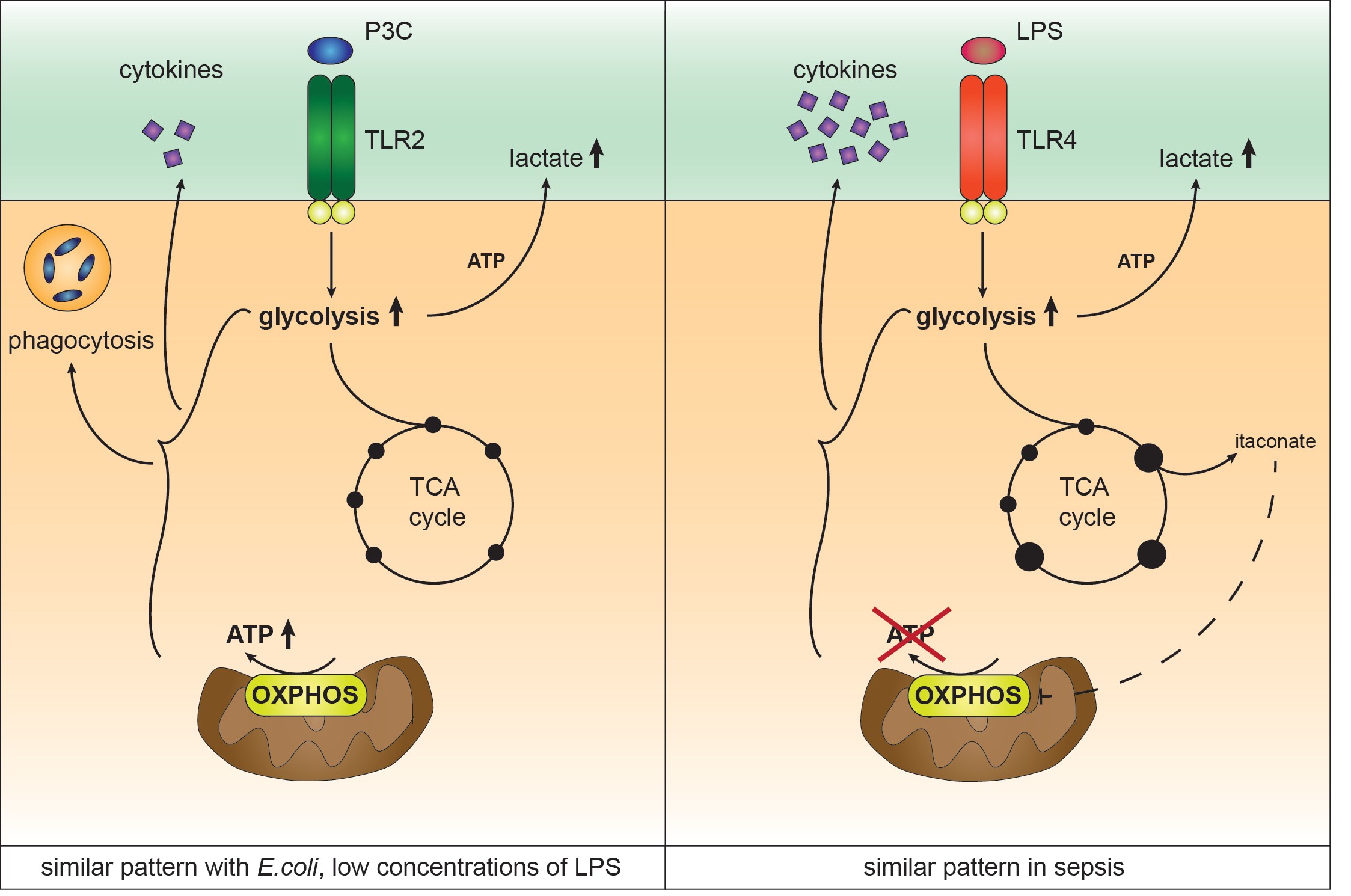 *Microbial stimulants bind to a family of receptors called ‘Toll-like receptors’ (TLR) on the surface of immune cells. Pure ligands of these receptors ‘mimic’ microbial activation of immune cells in a simplified manner, and are therefore often used as stimuli in vitro.